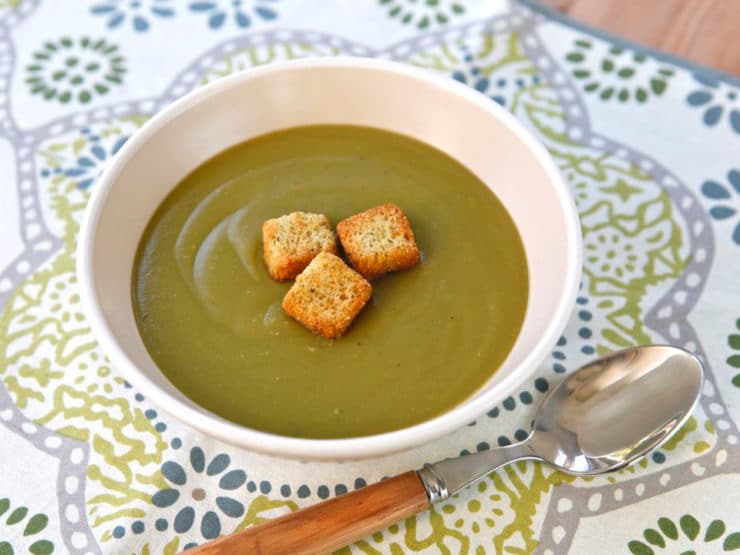 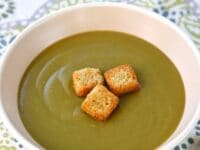 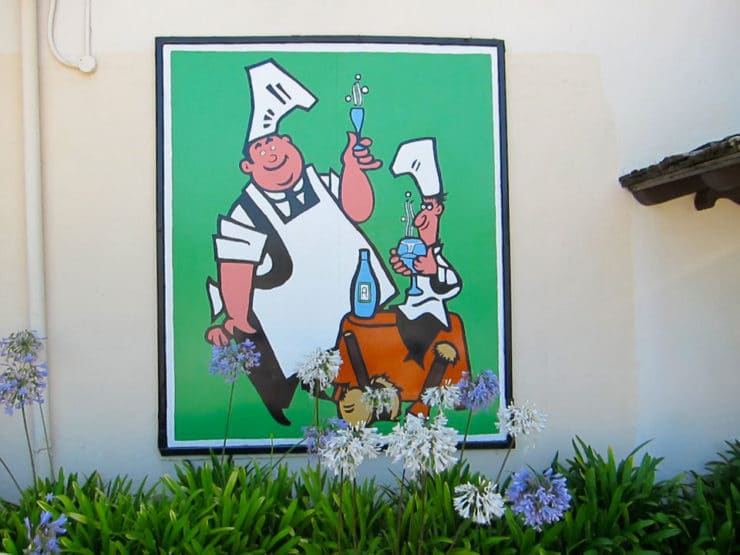 Hap-Pea and Pea-Wee, the friendly mascots of Pea Soup Andersen’s

Growing up, every once in a while, my dad would come up a brilliant idea: “Let’s go to Pea Soup Andersen’s for lunch!” The restaurant was a 1.5 hour drive from my hometown. It was, admittedly, a long way to go for a bowl of soup… but I never questioned it. In fact, I looked forward to it. We’d pile into his truck and cruise through the California countryside to Buellton. Along the way, Dad loved to recount the story of when he first visited Andersen’s.

“There was a guy with long hair sitting at the counter– a hippy. He ordered the ‘Traveler’s Special,’ a bottomless bowl of soup. The guy didn’t realize he could get a free refill. When the waitress came by, he looked at her with big, sad eyes and said, Oliver Twist-style, ‘Can I please have some more?’ He was shocked when she gave him one refill, then another, then another. He just couldn’t get enough of that soup.”

I don’t know why that story amused my dad so much, but it did, and I always enjoyed hearing him tell it. Those weekend jaunts to Buellton are one of my favorite childhood memories. And the soup… oh, the soup!

On a recent summer road trip with my hubby, we left Los Angeles and drove up the 101 freeway towards the Central Coast. I knew we’d be passing through Buellton, so I insisted we stop in for a bowl of soup. Along the freeway, for miles in each direction, billboards beckoned us to the restaurant. The Andersen’s cartoon mascots, Hap-Pea and Pea-Wee, held up signs to let us know how many miles we had left… 112 miles! 35 miles! The countdown built anticipation as I imagined that creamy, comforting bowl of pea soup. Before we knew it, we were there. 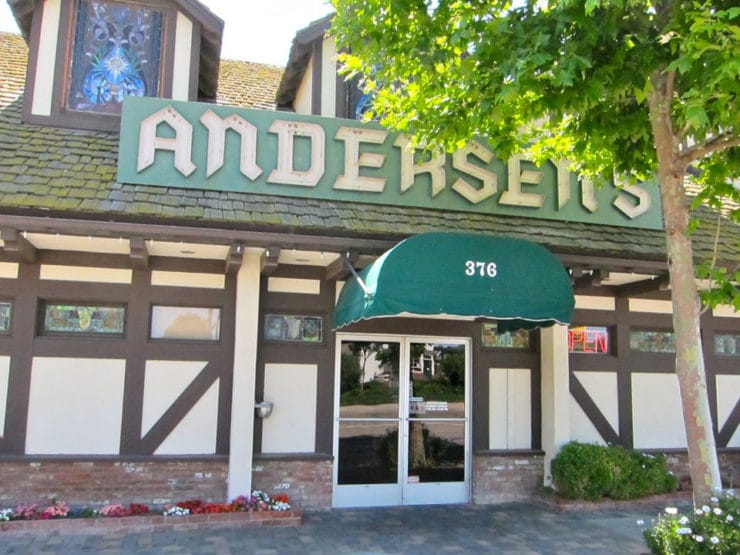 Pea Soup Andersen’s first opened their doors on June 12, 1924. The small cafe was run by Danish immigrant Anton Andersen and his wife, French immigrant Juliette. Anton had been a maître d’hôtel and catering manager, first in New York, then Los Angeles. His brother ran a business in the Danish town of Solvang, just a few miles from Buellton, so Anton and Juliette visited the area frequently. Over time, the couple grew tired of city life. When the 101 freeway was diverted through Buellton and electricity first came to the area, Anton and Juliette decided to buy a parcel of land. They moved to Buellton with their young son Robert T. and open a cafe. It was originally called “Andersen’s Electrical Cafe,” named after the family’s coveted electric stove– the only one in the Santa Ynez valley at that time. 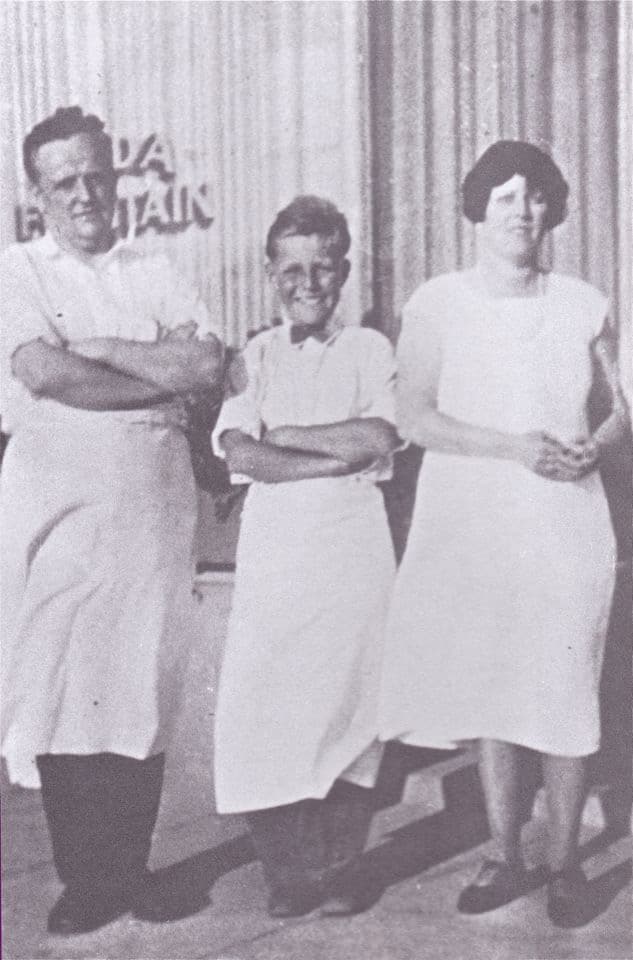 “Andersen’s Electrical Cafe” started as a roadside diner, catering to weary highway travelers. Anton acted as a short order cook, while Juliette became known for her finer French-inspired specialties. The couple tried out a variety of dishes in the beginning, adopting the ones that customers liked best–sandwiches, pancakes, ice cream. The little cafe became well known in the area, and customers began to visit from nearby Santa Barbara. Reporters from the Hearst newspaper empire would pass through on their way to and from Los Angeles and San Francisco. Celebrities stopped by on their trips up and down the coast. Before long, the cafe had made its mark on the local landscape.

About three months after opening, Anton and Juliette introduced pea soup to the menu. It was an immediate success, leading them to make the soup a permanent fixture. At that time the cafe was tiny, and Anton didn’t have a place to store the large sacks of dried peas needed for the increasing soup demand. He solved this by placing the gunnysacks in the window, along with a sign that read: “The Original Home of Split Pea Soup.” It started with an initial order of 10 pounds of peas… then 100. Within three years of opening, the Andersen’s had placed an order for one ton of split peas from Chicago. That’s a lot of peas! 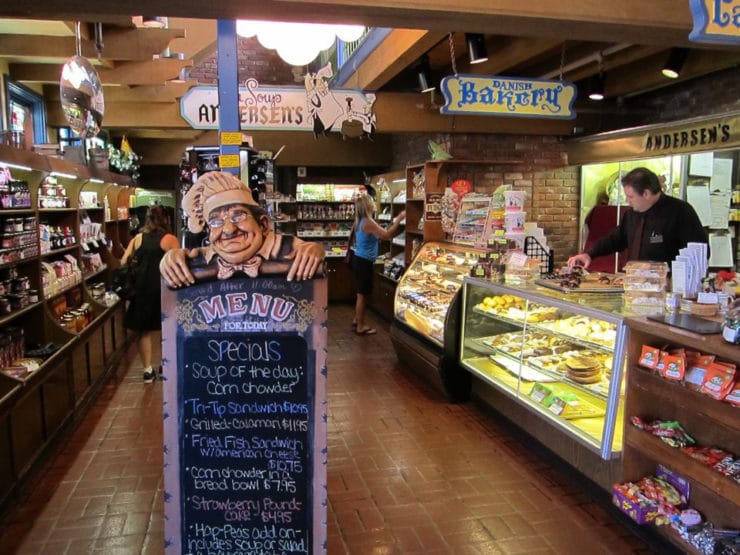 In 1928, the Andersen’s expanded their business, building a hotel and adjacent dining room. They renamed the place the “Bueltmore,” combining the name of the Biltmore hotel (where Anton once worked) and Buellton. In the late 1930’s, Anton and Juliette’s son Robert joined the family business. Known by the nickname “Pea-Soup,” Robert was responsible for many of the marketing plans that helped bring the restaurant even greater success– billboards along the highway, family-friendly menus, and announcing to the public that they sold over 100,000 bowls of soup per year. The hotel was again renamed– Andersen’s Valley Inn. Robert’s wife, Rosemary, opened a gift shop in the restaurant. The business continued to grow.

The hotel briefly closed during World War II and housed soldiers. When it reopened after the war, Robert commissioned Disney cartoonist Milt Neil to create new drawings for their official pea-splitting mascots. A contest was held to name the two characters– Hap-Pea and Pea-Wee. The dining room was enlarged, and the inn was once again renamed in 1947. The new name, Pea Soup Andersen’s, became permanent, as did the original logo from the Electrical Cafe so many years ago… “The Home of Split Pea Soup.” 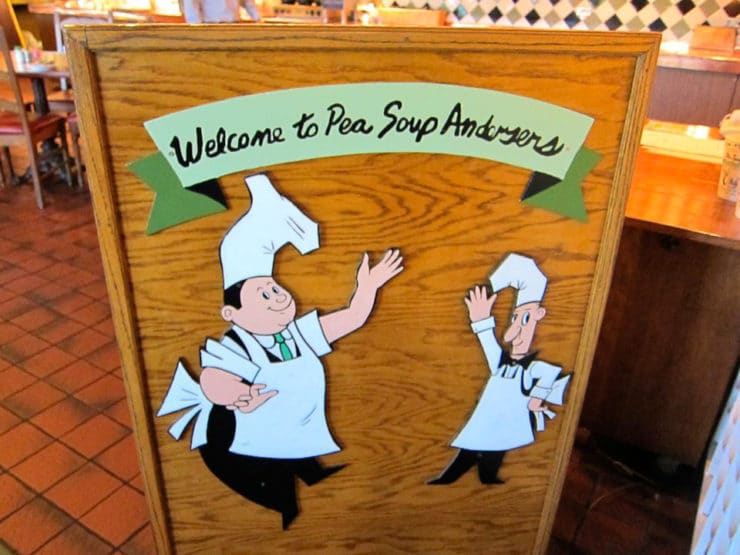 Over the years, Pea Soup Andersen’s continued to expand. A Danish bakery and cocktail lounge were added. New restaurants were opened in Santa Maria and Salinas. The family business was eventually sold to Vince Evans, a local actor and ranch owner who was good friends with Ronald Reagan. Under Vince’s ownership, the business flourished, eventually purchasing 50 tons of split peas a year to keep up with demand. The Santa Maria and Salinas locations were sold, and another location was added in Santa Nella, CA. Vince ran the business successfully for 15 years. In 1980, sadly, he and his family died in a small plane crash near Santa Ynez airport. The business was eventually purchased by Pea Soup Properties Limited in 1983; that corporation continues to run the business today. The company now sells over 1.5 million bowls of pea soup per year; they also sell canned pea soup to grocery stores across the country. 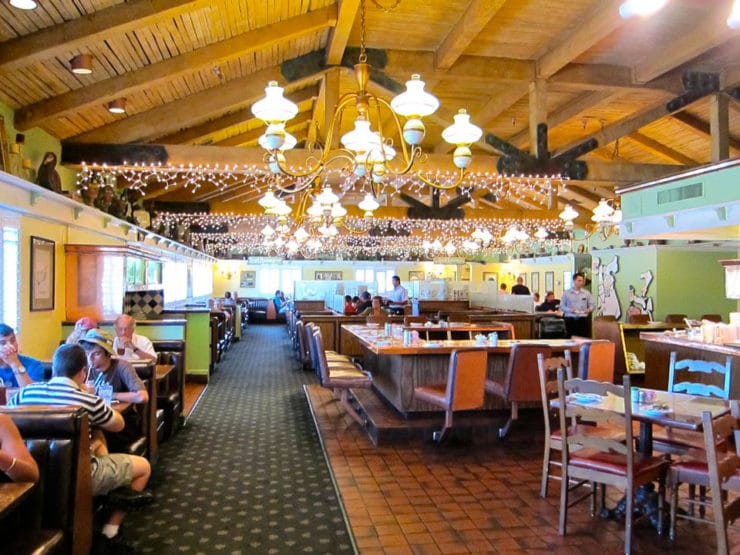 What I love most about Andersen’s is how quaint and kitschy it is. It remains unchanged from my childhood– the same carpet, pea-green walls and orange seats that I remember sitting in as a ten year-old. It’s oddly cozy, with a Danish theme throughout. Bringing my husband there for lunch was a trip down memory lane.

I ordered the Traveler’s Special, like I always do… a bottomless bowl of soup, pumpernickel bread, onion bread, and a chocolate milkshake. The bread just okay (not as good as I remember it). The milkshake was so thick and creamy, I had to eat it with a spoon. And the soup… oh, the soup! 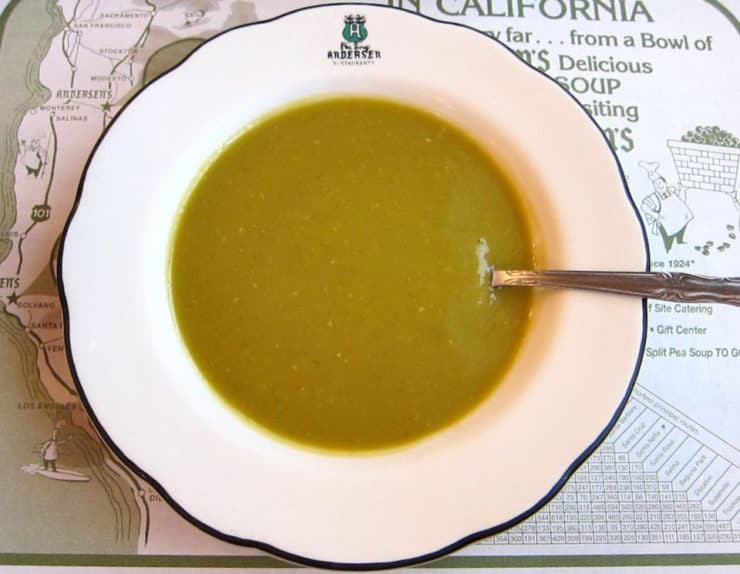 You can get it with ham added, if you want. I’ve always opted for the meat-free version. It has plenty of flavor on its own.

When I was a kid, the soup was only half the thrill. The best part of the meal was getting to the bottom of the bowl, which is decorated by a cartoon of Hap-Pea and Pea-wee. Ahh, simple pleasures… 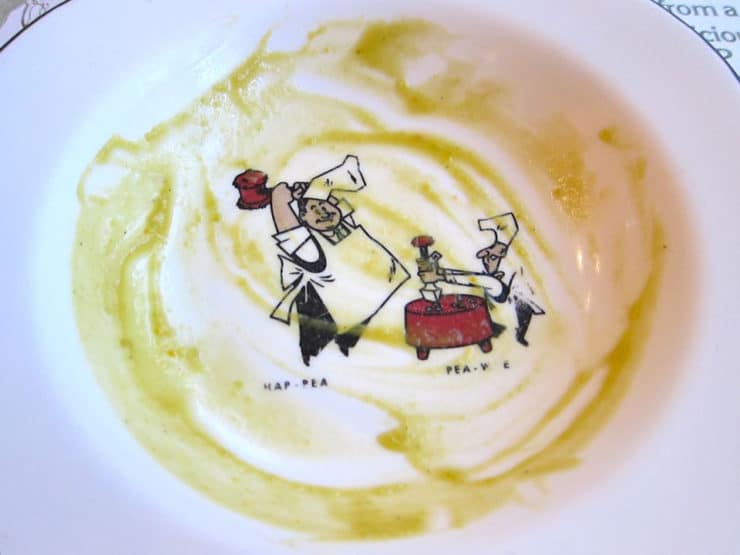 After we’d had our fill of soup, we headed out through the gift shop. I picked up a copy of the Pea Soup Andersen’s cookbook, a thin volume of restaurant-inspired classics and authentic Scandanavian recipes. Of course, I was most interested in the famous Pea Soup Recipe. There are other fun vintage dishes in there, too, including Danish Meatballs, Herring in Sour Cream, and Stuffed Onions. 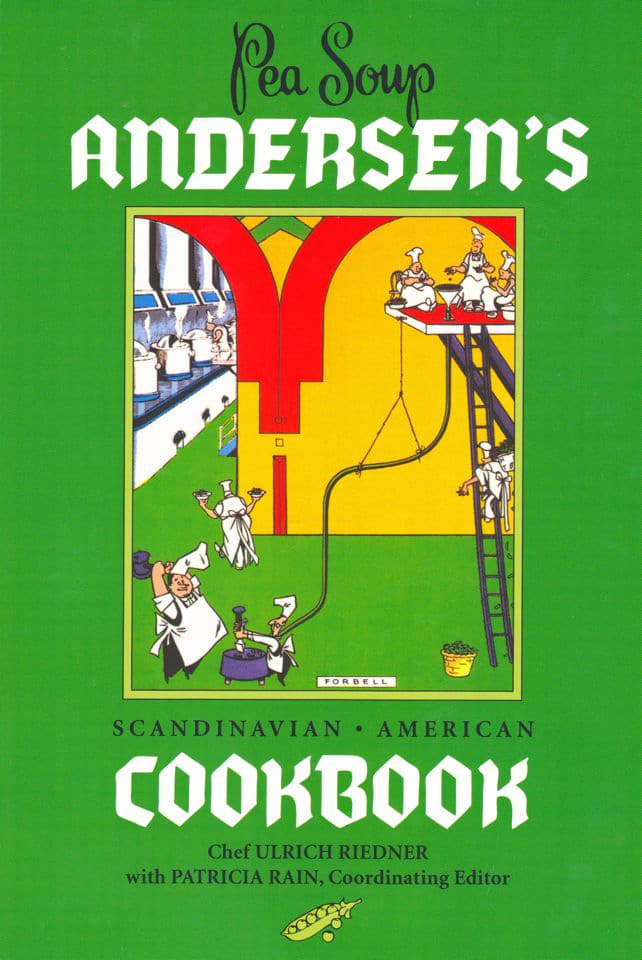 Even though the recipe in the cookbook says it’s the “official” pea soup recipe, I felt it wasn’t quite right, so I adapted it slightly. After a bit of tweaking, it’s just like the soup I grew up loving. You’ll want to use a food mill to acheive the proper texture (I use this one at home and recommend it highly). Don’t be put off by the green pureed appearance. If you’ve never tried Andersen’s soup before, you’re in for a treat! I topped mine with a few chunky seasoned breadcrumbs, they sopped up the soup nicely. Obviously you should omit the breadcrumbs if you’re gluten free or watching your carbs.

If you’re ever heading up or down the 101 freeway along the Central Coast of California, and you begin to see billboards with Hap-Pea and Pea-Wee, take their advice. Stop by Andersen’s for a Traveler’s Special. You can thank me later. 🙂 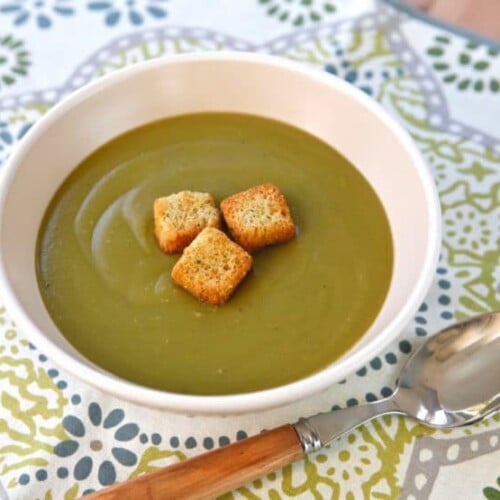 Nutritional information should be considered an estimate only; please consult a registered dietician, nutritionist, or your physician for specific health-related questions. Read more here. Please note that the recipe above is published using a recipe card plugin, with preexisting software which can auto-calculate metric measurements, as well as change the number of servings. Metric conversions and changes to the number of servings (resulting in different ingredient amounts) will only appear in the ingredient list, and are not changed within the step-by-step directions of the recipe.
2.5K shares
Autumn Votives PREVIOUS

How to Cook Butternut Squash NEXT