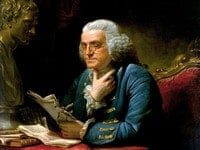 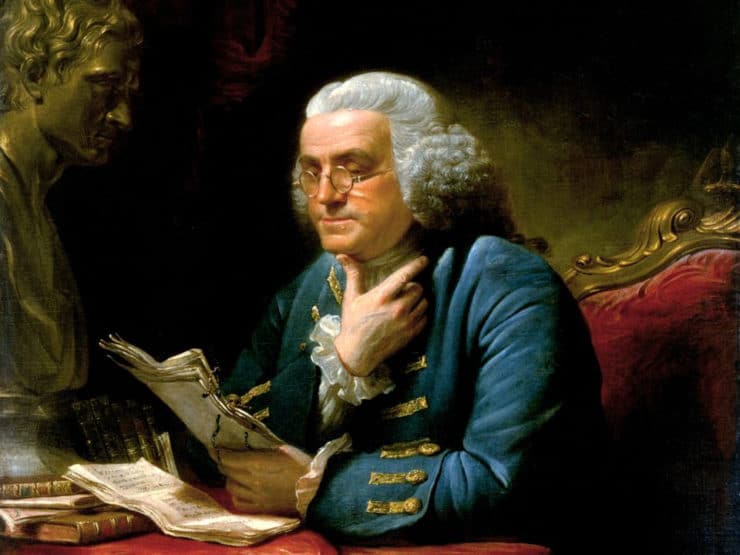 On this day in history– January 17, 1706– Benjamin Franklin was born. An American founding father, Franklin helped draft the Declaration of Independence and signed the Constitution of the United States. He was a noted printer, political theorist, musician, inventor, satirist, scientist and diplomat. He invented the lightning rod and bifocals, as well as many other useful gadgets.

And as if that weren’t enough, Benjamin Franklin was one of the original food lovers of America– a “Founding Foodie,” if you will.

As a young adult, Franklin lived as a vegetarian, surviving on a diet of mostly biscuits and raisins. The lifestyle started out of a need to save money (meat was expensive), but evolved into a value system. He began eating meat again while sailing on a ship from Boston to New York. The crew was cooking cod, and the smell of it made Franklin very hungry. He began to question his dedication to vegetarianism. He later wrote about the experience:

“I balanced some time between principal and inclination, until I recollected that when the fish were opened, I saw smaller fish being taken out of their stomachs. Then, I thought, ‘If you eat one another, I don’t see why we may not eat you.’ So I dined upon cod very heartily and have since continued to eat as other people, returning only now and then occasionally to a vegetable diet.”

Franklin’s famous food quote, “An apple a day keeps the doctor away,” was advice he seemed to live by. Franklin would often ask his wife Deborah to ship him barrels of apples while he lived abroad, as evidenced in a letter to her: “Goodeys I now and then get a few; but roasting Apples seldom, I wish you had sent me some… Newton Pippins would have been the most acceptable.”

Franklin helped introduce France to potatoes as a food source. At that time, the French believed potatoes to be poisonous. Franklin took part in a campaign to help the French embrace potatoes as an alternative to wheat after wheat crop failures caused a shortage. He was the guest of honor at a party thrown by French pharmacist Antoine-Augustin Parmentier, where every course of the meal featured potatoes.

In later life, Franklin supported the idea of cultivating local produce as a way of avoiding dependence on foreign food imports. He brought revolutionary political meaning to “locally sourced” foods. And yet, he appreciated the foods of other countries and cultures. On a visit to London he learned about soybeans and tofu. In 1770, he sent John Bartram some soybeans and wrote, “Father Navarrete’s account of the universal use of a cheese made of them in China, which so excited my curiosity… I have since learned that some runnings of salt (I suppose runnet) is put into water, when the meal is in it, to turn it to curds… These … are what the Tau-fu is made of.”

Franklin gained an affection for Parmesan cheese in Italy, as expressed in a 1769 letter to Bartram:

“And for one I confess that if I could find in any Italian Travels a Receipt for making Parmesan Cheese, it would give me more Satisfaction than a Transcript of any Inscription from any Stone whatever.”

Like most colonists of the time, Franklin was also a fan of wine. In a 1757 piece called “The Antediluvians Were All Very Sober,” Franklin wrote: “There can’t be good living where there is not good drinking.” He also wrote, in a 1779 letter to André Morellet, “Behold the rain which descends from heaven upon our vineyards; there it enters the roots of the vines, to be changed into wine; a constant proof that God loves us, and loves to see us happy.”

Happy birthday Benjamin Franklin! We raise a glass to you tonight. Cheers!

Nutritional information should be considered an estimate only; please consult a registered dietician, nutritionist, or your physician for specific health-related questions. Read more here. Please note that the recipe above is published using a recipe card plugin, with preexisting software which can auto-calculate metric measurements, as well as change the number of servings. Metric conversions and changes to the number of servings (resulting in different ingredient amounts) will only appear in the ingredient list, and are not changed within the step-by-step directions of the recipe.
96 shares
The Golden Girls Cheesecake PREVIOUS