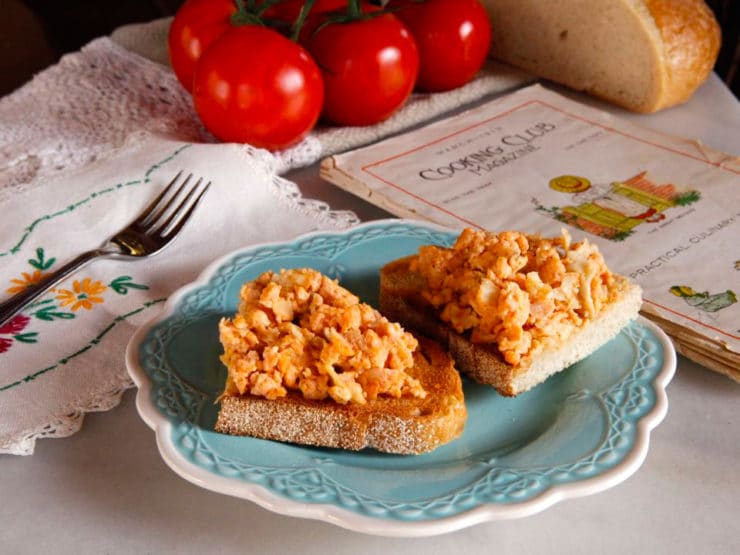 Recipe for Tomato Egg Scramble with butter and crackers on toast from a 1913 cooking magazine called Cooking Club. Simple breakfast dish.
31 shares
5 from 1 vote
Jump to Recipe Email Me Recipes 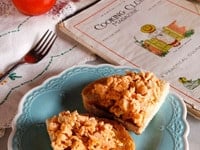 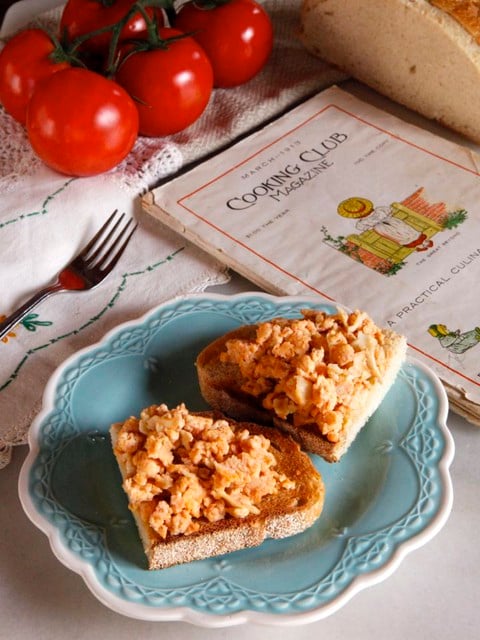 On March 4, 1913, Woodrow Wilson was sworn in as President of the United States. The day before he took office, suffragist Alice Paul organized the Woman Suffrage Parade that marched down Pennsylvania Avenue in Washington DC. The program for the event explained that the date was chosen “in a spirit of protest against the present political organization of society, from which women are excluded.” Meanwhile in Russia, the House of Romanov celebrated their 300th anniversary as successors to the Russian throne. That same year Richard Nixon, Rosa Parks and Vivienne Leigh were born.

I recently flipped through my growing collection of vintage Cooking Club magazines and found a March 1913 issue. I love these old magazines, they give me a glimpse of the recipes, cooking methods and housekeeping tips that were popular during the time period. This particular issue isn’t filled with quite as many fun or pretty images as previous issues I’ve covered here on The History Kitchen (see January 1905 and February 1908), but its articles are no less entertaining and educational. 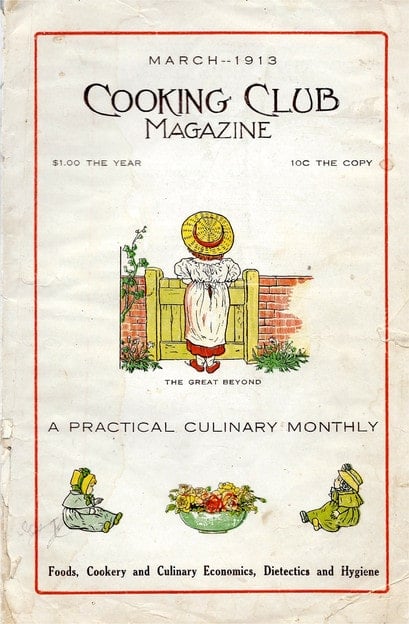 A section titled Favorite Recipes asks for reader participation: “We will be glad to print the favorite recipes of subscribers if they will be kind enough to send them to us.” A few of the standout reader-submitted recipes include School Girls’ Sandwiches, Veal Porcupine, Economy Chocolate Cake, Vegetable Oysters, Sand Tarts and Feathery Flannel Flapjacks… try saying that three times fast! In addition to these recipes, there are also several pages dedicated to chocolate recipes and cooking ideas for St. Patrick’s Day. 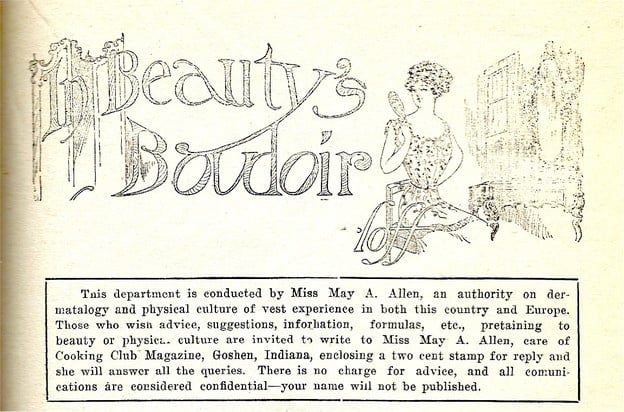 I was intrigued by a column called Beauty’s Boudoir. Over the course of several pages, Miss May A. Allen offers her “expert” beauty advice. As you might imagine, her suggestions are an amusing reflection of the time period. For example, “exquisite rose-leaf complexions” are few and far between as a result of the “woman’s fondness for sweets.” Miss May advises taking a cold bath with a handful of salt added first thing in the morning. After the bath one should rub their body with the “roughest of rough” towels. This method results in a “freshness and rudy glow to the cheeks and lips that can be secured by no other means.” Thought it’s just an early form of exfoliation, it sounds like an uncomfortable way to start the day. 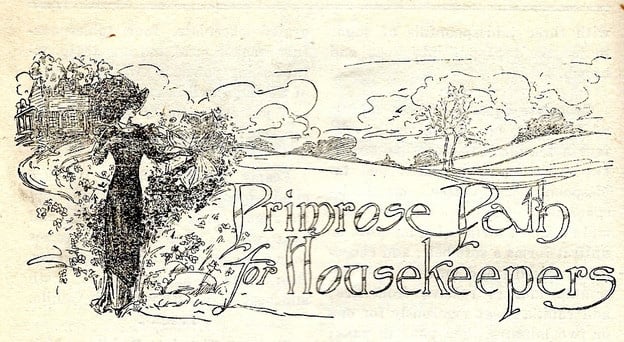 A section of cooking and household tips called the Primrose Path for Housekeepers offers some surprisingly useful ideas, including:

“One quarter cupful of almonds chopped to a paste improved celery soup.”

“If there is occasion to wet cocoa, flour or cornstarch with water, use a fork for the process, instead of a spoon; the blending of the ingredients will be much more rapidly accomplished.”

“Sweet potatoes sometimes need to be baked so long that a goodly part is wasted, in this case parboil for twenty minutes then place in the oven to finish.”

My favorite article in this issue is titled The Ice Cream Graduate. The short piece discusses Iowa State College’s difficulty “meeting the demand for scientifically-trained ice-cream men.” In the previous year, 38 men passed a year-long course in ice cream and butter science and were offered yearly salaries between $900 and $2,000 upon graduation. Another course in ice cream at the Agricultural College in Minneapolis covered approved methods for storage, marketing, shipping and flavoring. While reading this article I couldn’t help but smile knowing that at one time, it was possible to earn a degree in ice cream. I’m truly sorry I missed that opportunity. 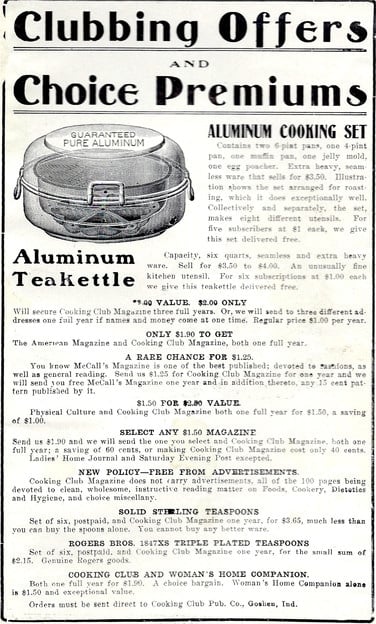 Even the earliest issues of Cooking Club invite readers to sell subscriptions to their magazine, offering free incentives based on the number of subscriptions sold. In March 1913, the “prizes” for selling subscriptions to Cooking Club, as illustrated above, are pretty impressive. I’ll take a set of solid sterling teaspoons, thank you very much! Considering recent concerns about cooking with aluminum, I find it amusing that “Guaranteed Pure Aluminum” was actually a selling point back then.

For this month’s Cooking Club recipe I chose “Tomato Scramble,” a simple dish of scrambled eggs dressed up with tomatoes that have been pushed through a sieve. I used small cherry tomatoes, but feel free to use your favorite variety. Melted butter and crushed crackers are added for richness and texture. I have not altered the original recipe, except to add salt and pepper to taste. Served over toast, this scramble makes would be a lovely simple breakfast on a lazy Sunday morning… or maybe for “brinner.” I just love brinner, don’t you? 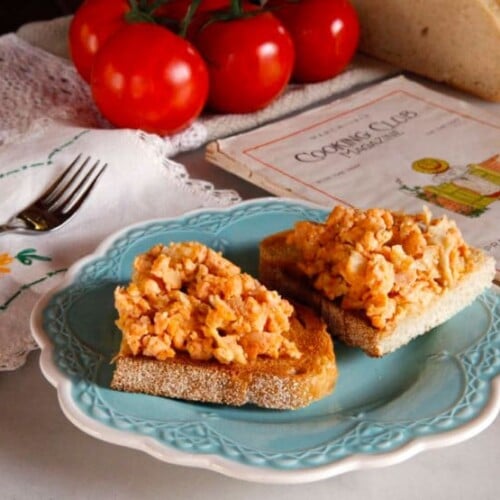 Nutritional information should be considered an estimate only; please consult a registered dietician, nutritionist, or your physician for specific health-related questions. Read more here. Please note that the recipe above is published using a recipe card plugin, with preexisting software which can auto-calculate metric measurements, as well as change the number of servings. Metric conversions and changes to the number of servings (resulting in different ingredient amounts) will only appear in the ingredient list, and are not changed within the step-by-step directions of the recipe.
31 shares
Vegetable Curry Quinoa Bowls PREVIOUS

Roasted Carrots with Dill NEXT