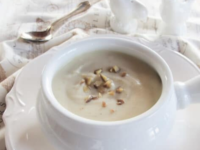 A recent trip to Israel provided me endless inspiration in the kitchen. I had an incredible time exploring the country, dining with friends and learning some amazing new recipes. It’s particularly fitting that the first recipe I’m sharing from my trip is Jerusalem Artichoke Soup – especially since I learned the recipe just a hop, skip and a jump from Jerusalem! 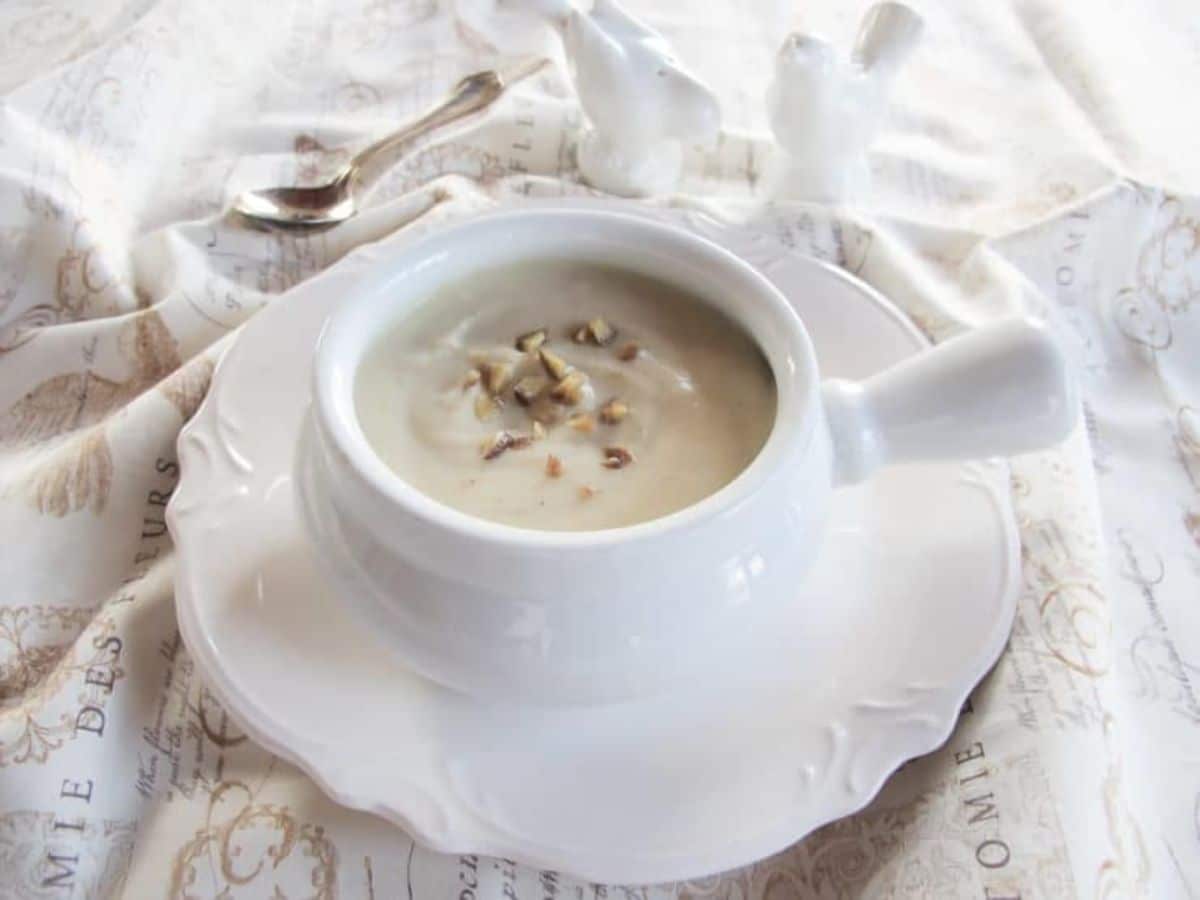 On our trip we had dinner with our good friends Ido Aharoni and his wife, Julie Goodman Aharoni. For many years, Ido was the Consulate General of Israel in New York. He recently moved on from his ambassador post and has settled in a beautiful community just outside of Jerusalem. My husband and I had the pleasure of enjoying a home-cooked meal prepared by Julie and their lovely daughter, Sharon. They prepared some amazing falafel and they gave me a gift of a falafel scoop– can you believe I’ve never used one before? I’ve always just rolled them with wet hands the old fashioned way. Gadgets are fun!

To start the meal, Julie and Sharon brought out the most delicious Jerusalem Artichoke soup. The flavor was so unique that I knew I had to share it with you. Julie generously sent me the recipe, which is deceptively simple but delivers a rich and complex flavor. 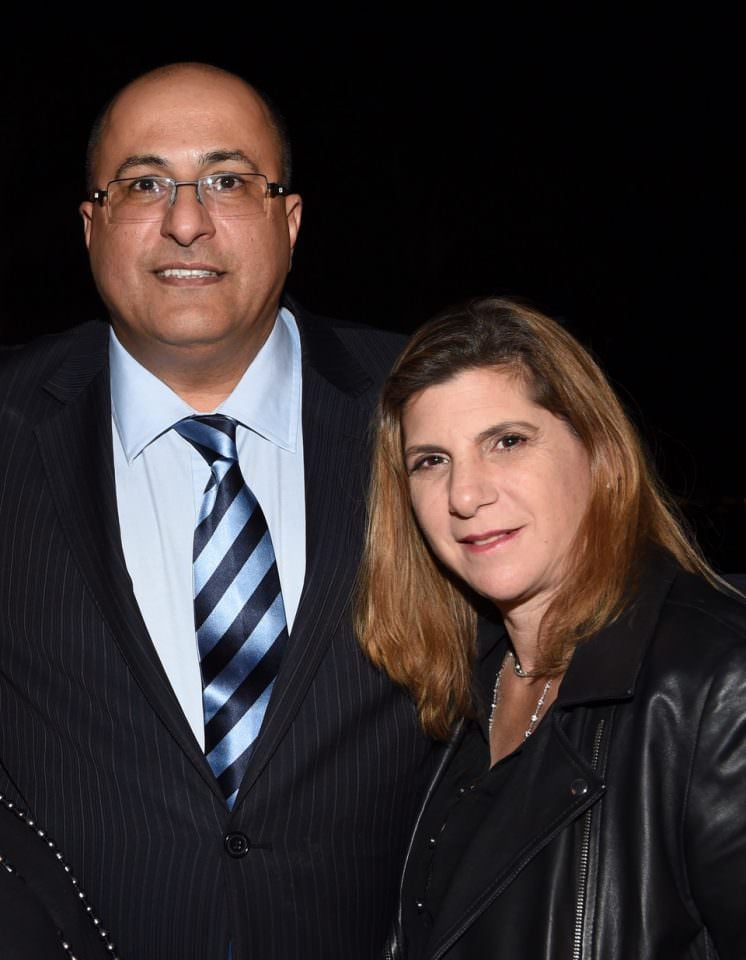 Despite their name, Jerusalem artichokes, also known as sunchokes, have no connection to Jerusalem or to artichokes. These oddly-shaped tubers have a slight resemblance to fresh ginger and are actually a relative of sunflowers. Native to North America, Jerusalem artichokes were a staple in Native American gardens. In the early 1600’s French explorer Samuel de Champlain stumbled upon them in one of these gardens; when he tasted them, he noticed they had a similar flavor to artichokes.

Later, when they arrived in France, Parisian street vendors began calling them topinambours, French for tubers. Sometime before 1633 they arrived in Italy, where they were known as girasole, which translates to “turning toward the sun.” It is believed that the word girasole eventually evolved into “Jerusalem,” resulting in the name Jerusalem artichoke.

Throughout history these tasty little tubers have experienced times of popularity and decline. During the early 1600s in France, they were favored over potatoes until a strange rumor declared that were a cause of leprosy, possibly due to the texture of their outer skin resembling the effects of the disease. They were often turned to for sustenance during times of famine. Explorers Lewis and Clark ate them during their expeditions.

Julie finishes this soup with a garnish of chopped chestnuts and truffle oil, which is just lovely. I think chopped pistachios and a drizzle of chili-infused oil would also work well. Or forego the garnish, if you wish– it’s nice all on its own, too. 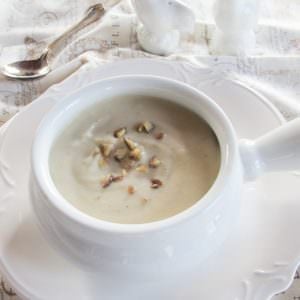 You will also need: vegetable peeler, soup pot, immersion blender A slight word of caution - Jerusalem artichokes contain inulin, a substance that can cause stomach sensitivity in some people. If you are inulin sensitive, or you just want to be safe, make sure you take a digestive enzyme before indulging in any Jerusalem artichoke recipe.

Nutrition Facts
Jerusalem Artichoke Soup
Amount Per Serving
Calories 423 Calories from Fat 243
% Daily Value*
Fat 27g42%
Saturated Fat 19g119%
Sodium 609mg26%
Potassium 1183mg34%
Carbohydrates 44g15%
Fiber 3g13%
Sugar 23g26%
Protein 6g12%
Vitamin A 360IU7%
Vitamin C 10.1mg12%
Calcium 49mg5%
Iron 10.9mg61%
* Percent Daily Values are based on a 2000 calorie diet.
Tried this recipe?Let Us Know How It Was In The Comments.
5 from 1 vote
Nutritional information should be considered an estimate only; please consult a registered dietician, nutritionist, or your physician for specific health-related questions. Read more here. Please note that the recipe above is published using a recipe card plugin, with preexisting software which can auto-calculate metric measurements, as well as change the number of servings. Metric conversions and changes to the number of servings (resulting in different ingredient amounts) will only appear in the ingredient list, and are not changed within the step-by-step directions of the recipe.
Stay in touch with me on Facebook, Twitter, Pinterest, YouTube and Instagram. Did you make one of my recipes? Tag @toriavey & hashtag #toriskitchen on Instagram or Twitter… I want to see!
526 shares