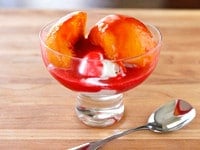 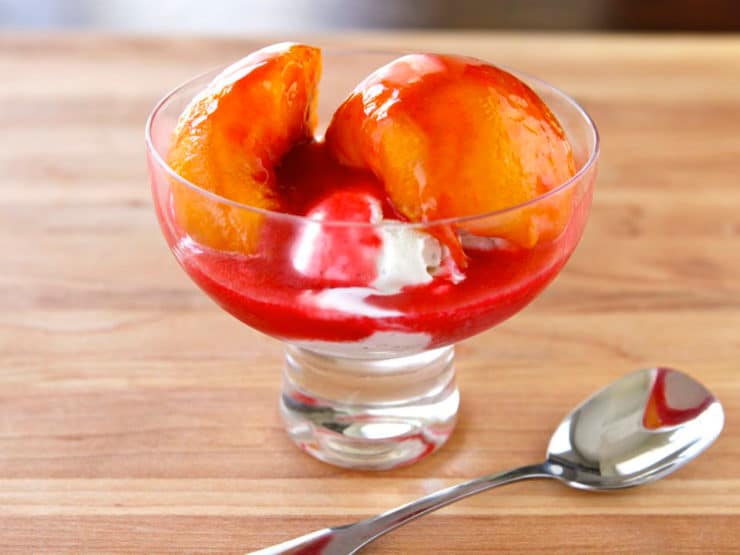 The Peach Melba is one of the most famous and beloved desserts in the world. This creamy and cool dish – a simple and classic preparation of vanilla ice cream, sugary peaches, and raspberry sauce – has graced restaurant menus for decades. While many people are familiar with this delectable dessert, few know the story behind the dish. It all starts with famed French chef Auguste Escoffier and his friendship with an Australian opera singer named Nellie Melba.

First, let’s meet Nellie, who was born Helen “Nellie” Porter Mitchell in Richmond, Victoria – a suburb of Melbourne, Australia – on May 19, 1861. Nellie was the eldest of several children in a music-loving family. Her father, David Mitchell, was a successful building contractor and brickmaker. Nellie’s mother, Isabella, played several instruments, and served as Nellie’s first music teacher. Nellie was a tomboyish child with a fondness for whistling. She first sang in public at the age of eight, in December 1869, in the new Richmond town hall. She was the youngest to perform in a community concert for 700 spectators as part of the town hall’s grand opening. Nellie sang three songs, accompanying herself on the piano, to the delight of the audience. Local reporters wrote enthusiastically about her performance, saying she was a “gem,” “incomparable,” and “a musical prodigy,” giving an early glimpse of the success on Nellie’s horizon. 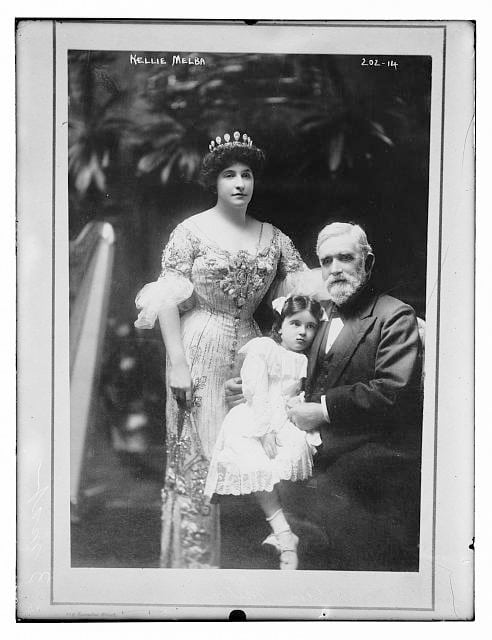 Nellie received her early education at a boarding school in Richmond. As a young lady she enrolled in the Presbyterian Ladies College, where she studied piano and voice. Around the time of her mother’s death in 1880, Nellie left school and moved to Queensland with her father. There she met her husband, Charles Nisbett Frederick Armstrong. They married in 1882 and had a son, George. Their early time together was short-lived; Nellie became depressed by her husband’s angry temper, as well as the area’s harsh tropical climate and constant rain. In 1884, taking her son and a few possessions, she left her husband for Melbourne in hopes of pursuing a serious musical career. She and her husband would reconnect sporadically over the next few years, till they eventually divorced in 1900. 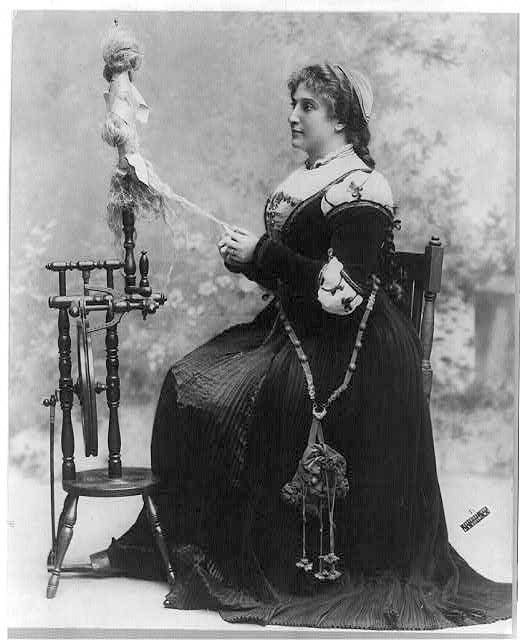 Nellie sang her way from Melbourne to Sydney, making a name for herself in the city as an operatic soprano. She then headed to London, where she made the connections necessary for pursuing a career in earnest. In 1886 she began performing in concerts organized by Wilhelm Ganz, a singing professor at the Guildhall School of Music. Though she found some success in London, she felt her career was not progressing quickly enough. A patron from Melbourne had written Nellie a letter of introduction to famed German mezzo-soprano, Mathilde Marchesi. Nellie traveled to Paris to meet Madame Marchesi, who agreed to take her on as a singing pupil and would end up having a great influence on Nellie’s career. In fact, Marchesi is responsible for convincing Nellie to take the stage name Nellie Melba—Melba deriving from her home city of Melbourne. After many years of study and countless hours pounding pavement, Nellie’s operatic debut finally came in 1887 in Brussels, as Gilda in Verdi’s Rigoletto. 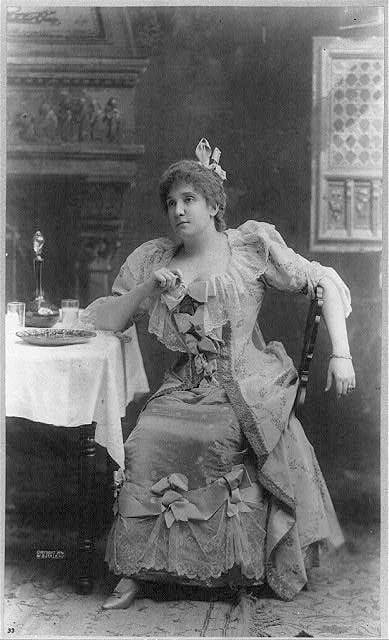 Nellie Melba in costume, circa 1896. Source: Library of Congress

Over time Nellie gained great popularity, singing in principal opera houses in Europe and the United States, most notably Covent Garden in London and New York’s Metropolitan Opera. She was well-known in high-society circles, and was asked to perform for important figures including Tsar Alexander III, Emperor Franz Joseph and Queen Victoria. She was the Edwardian equivalent of a major celebrity; when she appeared in public, crowds fought for her attention.

It was in London, while performing at Covent Garden, that Nellie became acquainted with Escoffier. The legendary French chef was known and respected worldwide for his innovative, imaginative dishes and “haute cuisine.” During the late 1800s, Escoffier partnered with César Ritz (of Ritz Carlton fame), and made a name for himself as the head chef of the restaurants located inside the famous Ritz hotels. His food was known for being elaborate and fancy—what we might describe today as being “typically French.” His 11-course meals were sauce-heavy, often including smoked salmon with scrambled eggs and Beef Wellington. They became the trademark of indulgence and wealth. Many of his creations were named for the star patrons of his restaurants…which, of course, brings us to the Peach Melba. 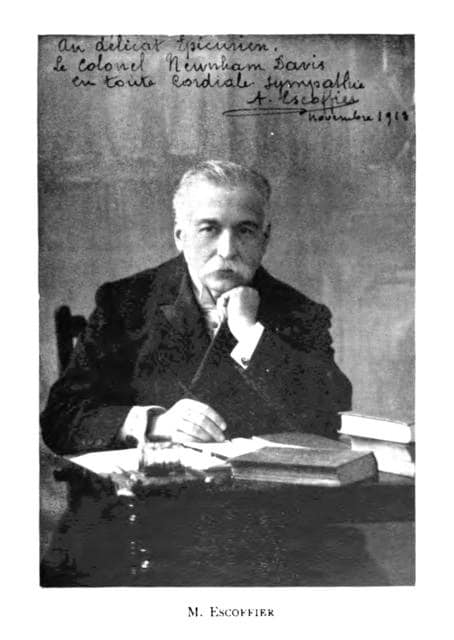 Nellie Melba often ate at Escoffier’s restaurants while performing in Covent Garden during the late 1890s and early 1900s. Escoffier claims to have first created the Peach Melba while Nellie was a guest at the Savoy Hotel, where he was chef. As the story goes, Nellie sent Escoffier tickets to her performance in the Wagner opera Lohengrin. The production featured a beautiful boat in the shape of a swan. The following evening, Escoffier presented Nellie with a dessert of fresh peaches served over vanilla ice cream in a silver dish perched atop a swan carved from ice. He originally called the dish Pecheau Cygne, or “peach with a swan.” A few years later, when Escoffier opened the Ritz Carlton in London with César Ritz, he changed the dish slightly by adding a topping of sweetened raspberry purée. He renamed the dish Pêche Melba, or Peach Melba as we know it here in the U.S. The rest, as they say, is history.

Melba toast was also named after Dame Nellie… but that’s another story, for a future post. For now, I would like to share Escoffier’s original recipe for the Peach Melba, broken down into simple steps from his autobiography, Memories of My Life. Escoffier swore by the simplicity of his original dish; as the Peach Melba became more popular, he scoffed at the numerous variations that spread throughout the restaurant community. In his words, “Pêche Melba is a simple dish made up of tender and very ripe peaches, vanilla ice cream, and a purée of sugared raspberry. Any variation on this recipe ruins the delicate balance of its taste.”

Here is the original recipe for the Peach Melba, translated to English from Escoffier’s own words:

Chose 6 tender and perfectly ripe peaches. The Montreuil peach, for example, is perfect for this dessert. Blanch the peaches for 2 seconds in boiling water, remove them immediately with a slotted spoon, and place them in iced water for a few seconds. Peel them and place them on a plate, sprinkle them with a little sugar, and refrigerate them. Prepare a liter of very creamy vanilla ice cream and a purée of 250 grams of very fresh ripe raspberries crushed through a fine sieve and mixed with 150 grams of powdered sugar. Refrigerate.

To serve: Fill a silver timbale with the vanilla ice cream. Delicately place the peaches on top of the ice cream and cover with the raspberry purée. Optionally, during the almond season, one can add a few slivers of fresh almonds on top, but never use dried almonds.

The recipe is, as Escoffier promised, quite simple. When made as written, the simple, natural flavors really shine. I have reproduced the recipe below with clear step-by-step instructions and American measurement equivalents. The only step I have added to the original recipe is to give the peaches a quick soak in water with a touch of lemon juice… this will help keep the peeled peaches from turning brown and oxidizing as they chill. If you don’t mind the peaches browning a bit, feel free to skip this optional step.

While I did not have a silver timbale for serving, the dish makes a lovely presentation in glass, too. Make this dessert with the succulent, ripe seasonal peaches that fill our markets now, and prepare to be amazed. A true Peach Melba is something very special, indeed. 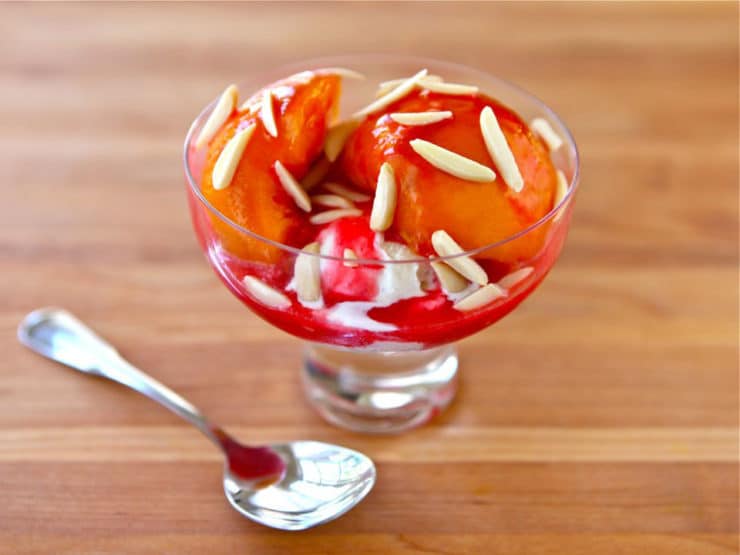 Nutrition Facts
Escoffier’s Peach Melba
Amount Per Serving
Calories 342 Calories from Fat 117
% Daily Value*
Fat 13g20%
Saturated Fat 4g25%
Cholesterol 29mg10%
Sodium 55mg2%
Potassium 512mg15%
Carbohydrates 54g18%
Fiber 5g21%
Sugar 47g52%
Protein 6g12%
Vitamin A 765IU15%
Vitamin C 15.5mg19%
Calcium 122mg12%
Iron 0.9mg5%
* Percent Daily Values are based on a 2000 calorie diet.
Tried this recipe?Let Us Know How It Was In The Comments.
5 from 1 vote
Nutritional information should be considered an estimate only; please consult a registered dietician, nutritionist, or your physician for specific health-related questions. Read more here. Please note that the recipe above is published using a recipe card plugin, with preexisting software which can auto-calculate metric measurements, as well as change the number of servings. Metric conversions and changes to the number of servings (resulting in different ingredient amounts) will only appear in the ingredient list, and are not changed within the step-by-step directions of the recipe. 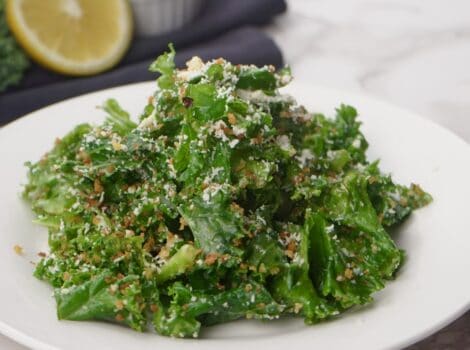 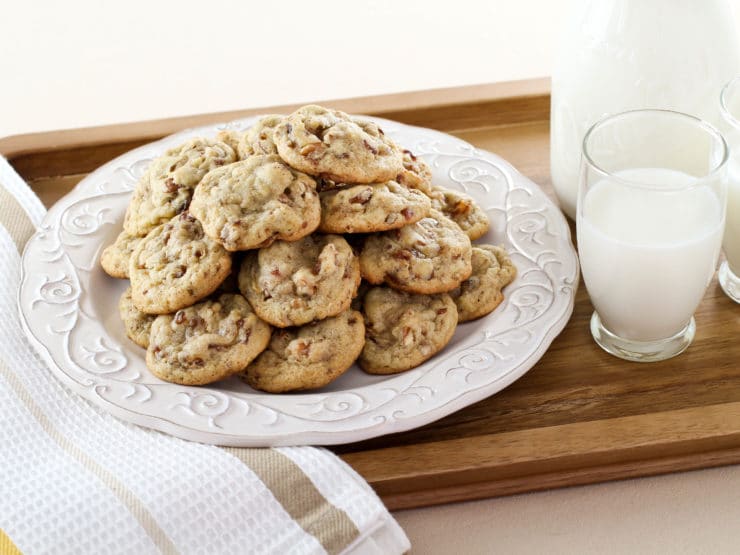