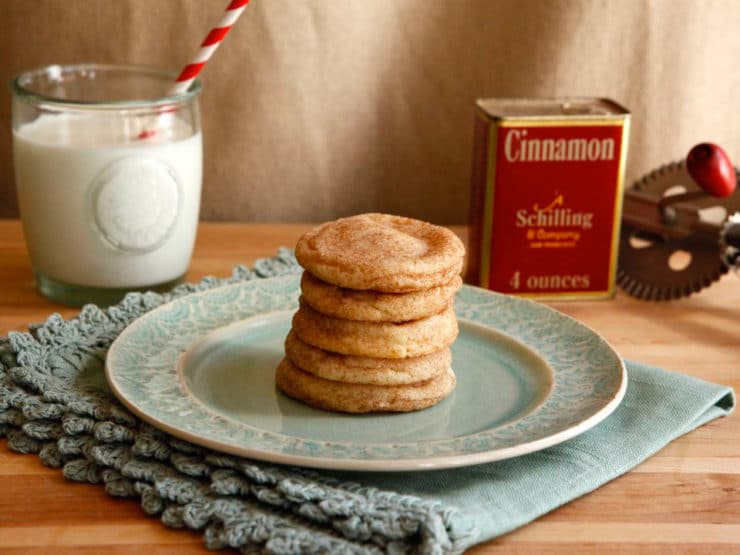 Alcatraz was a harsh prison, but it had pretty great food. Learn about the community living on Alcatraz and try a vintage recipe from the island.
615 shares
4.84 from 6 votes
Jump to Recipe Email Me Recipes 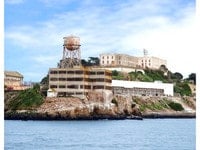 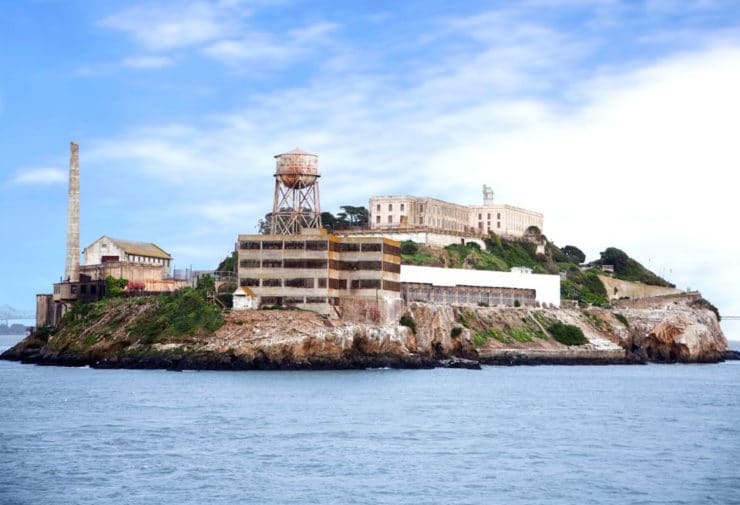 The island prison of Alcatraz

U.S.P. Alcatraz, popularly known as “The Rock,” officially opened its doors to inmates on August 11, 1934. On that first ferry to the prison were notorious criminals Al Capone, Robert “Birdman of Alcatraz” Stroud and George “Machine Gun” Kelly, among others. During its surprisingly short time of operation, just shy of 29 years between 1934 and 1963, Alcatraz earned a dark history as a penitentiary. On a rugged, chilly island off the Northern California coastline, this prison was reserved for some of the most notorious criminals of the time—gangsters, murderers, bank and train robbers among them. Being isolated on this lonely island, with San Francisco city almost close enough to touch, was enough to drive some prisoners mad. During its years of operation there were 14 escape attempts. Only 2 of those attempts were successful, though many believe the prisoners who vanished were likely swept out to sea and drowned in the cold, turbulent, shark-infested waters (there is some debate about the participants of a 1962 escape attempt who may have survived). While many know about the harsh conditions on Alcatraz, few have heard about a bright spot in this otherwise bleak place—the food. Believe it or not, the food served at Alcatraz was widely considered some of the best in the U.S. prison system. I took a tour of Alcatraz last summer with my husband and was able to learn first hand about the superior culinary conditions in this otherwise dire place. I also learned about the small non-prisoner community living on Alcatraz, made up of prison guards, their wives and children… many of whom loved to cook. 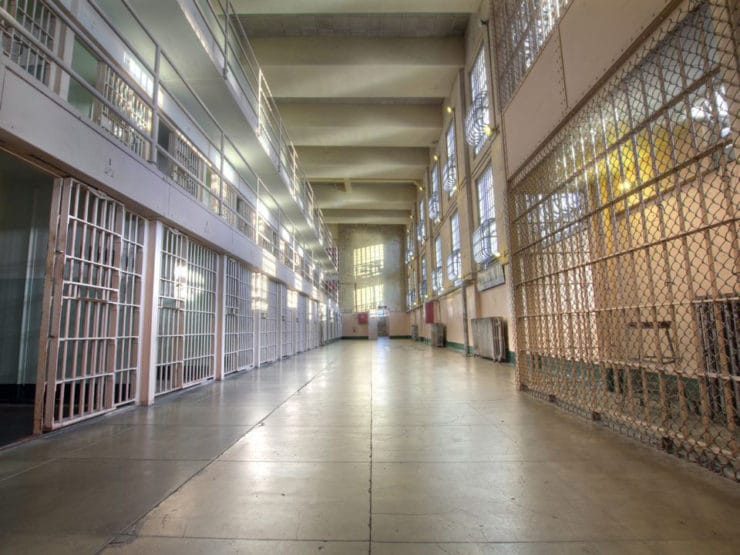 Alcatraz earned its name from the Spanish explorer Juan Manuel de Ayala in 1775. He was the first recorded explorer to sail into the waters now known as the San Francisco Bay. He dubbed the island Isla de los Alcatraces (Isle of the Pelicans); the name was later Anglicized to Alcatraz. Excessively violent criminals were sent to Alcatraz for behavior modification, a new strategy by the U.S. Prison System that attempted to reform prisoners rather than just incarcerating them. Though this focus on rehabilitation was positive, Alcatraz was on the whole a fairly miserable place. The cells were small, ocean drafts were cold, and the inmates were some of the roughest around. The only plus side of being incarcerated at Alcatraz was the food. 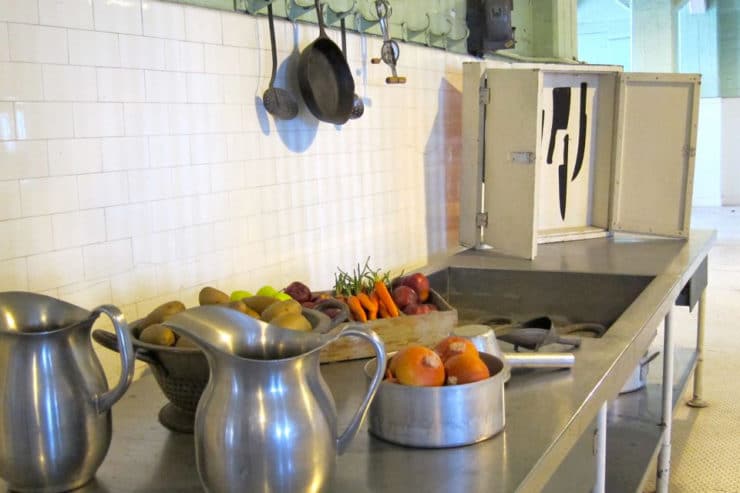 On Alcatraz food was viewed as a way to boost morale amongst the inmates; quality was also kept high to avoid unnecessary disputes in the dining hall. Prison menus were periodically analyzed by supervisors. Letters were often sent to the warden with thoughtful suggestions like including mustard when serving corned beef and cabbage. Here is a passage from one such review, emphasizing the importance of using descriptive, appetizing terms on the prison menu:

The ‘June Peas’ was an excellent choice and this trick of menu-making should be exploited as much as possible when certain foods are in season. Other words that come to mind are ‘baby, young, milk-fed, spring, new, fresh, native, various colors (such as mashed YELLOW turnips,” cold (such as CHILLED tomato juice), old fashioned, home-made etc. The title of a dish can do much in creating anticipation.

Given that Alcatraz was located on an island, bulk orders of food had to be carried over by boat and stored in the basement. The standard kitchen included additional space for a vegetable room, butcher shop, bakery and even an ice cream freezer.  Fresh fruit and vegetables came from San Francisco’s produce district. Surplus canned or dehydrated items came from the military in an effort to decrease spending. All fresh water used for food, drink, laundry, showers and everything in between was brought in on boats and stored in a large tank on the island. 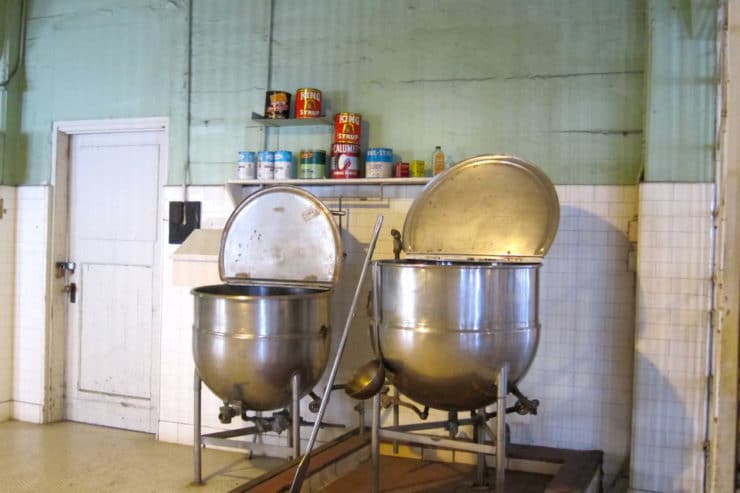 Meals were served-cafeteria style and inmates could take as much as they wished, as long as they cleaned their plates. If they did not clean their plates, they would forfeit a future meal. The dining hall rules stated: “Take all that you wish—eat all that you take.” Menu items, authorized by the Public Health Service, were rotated to ensure that nutritional standards were met. A typical meal consisted of soup, a salad or vegetable, a starch in the form of bread, pasta, rice or potatoes, meat and dessert. In 1939, when the administration purchased a letter board to display the daily menu, it was placed above the steam table between chalkboards listing the scores of professional baseball and football games, as well as those of Alcatraz’s own baseball teams. 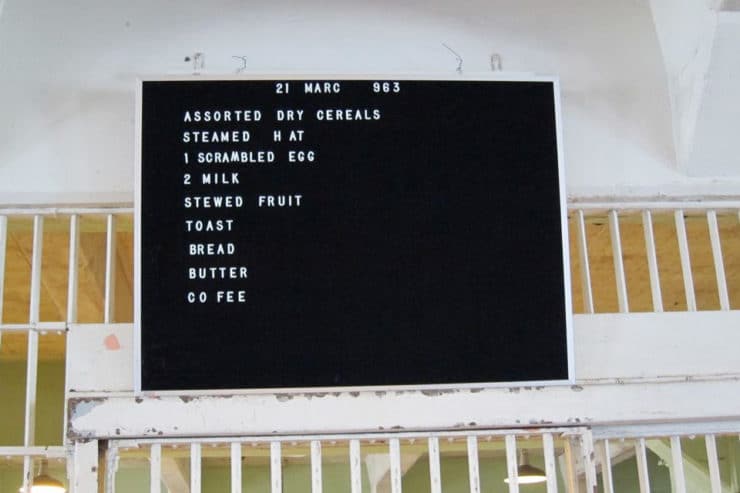 On holidays, meals might include turkey or steak, and the inmates received additional gifts of candy, cigarettes and fruit. Breakfast pastries like fruit snails and cinnamon snails, now known as fruit Danishes and cinnamon buns, were sometimes served and a welcome treat for inmates. Prisoners who worked in the kitchen were not given extra food or special privileges, though they appreciated the opportunity to create friendships with the kitchen staff.

Though the island of Alcatraz was mainly used for the incarceration of inmates, it was also home to a small community made up of the prison guards and their families. The civilian population totaled about 260 people, 60-90 of them children, living on five acres of land. Life on the island was difficult, as routine activities like grocery shopping had to be done in San Francisco via ferry. In an effort to create a sense of unity, the women on Alcatraz began organizing social clubs. During the 1950s, community cookbooks were put together and sold to raise funds for holiday parties, children’s activities and Sunday School events. 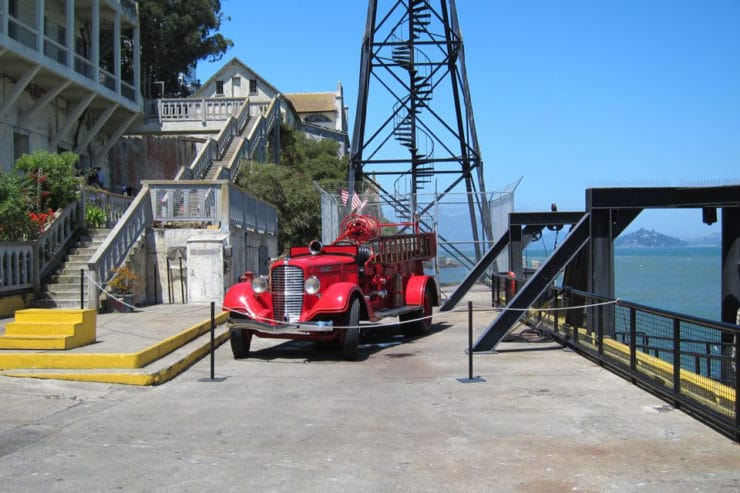 Community firetruck on the island of Alcatraz

On my visit to Alcatraz I purchased a reprint of one such community cookbook—the Alcatraz Women’s Club Cook Book. Originally published in 1952, the book is full of retro-style recipes including Hamburger Pie, Tuna Fish Casserole and Chicken Spaghetti. There are also several baked goods and sweet recipes, including the following recipe for Cinnamon Sugar Cookies, contributed by Mrs. Estelle Fisher. These cookies are made with shortening, which was quite popular during the 50’s as an alternative to butter. Shortening also would have been more shelf-stable and easier to store than fresh butter, which was more difficult to get hold of on Alcatraz. The recipe produces a sweet, simple, delightful cookie similar to a snickerdoodle. They are perfect for dunking into tea or coffee. They can easily be overbaked, so watch carefully—take them out when they are just done, as even a minute more of baking can cause them to turn crisp. They’re not bad when they’re crisp, but I much prefer them on the softer side. I’m thinking they would be even better if I subbed butter for shortening, but I haven’t had a chance to try it yet. If I do I’ll come back and update the blog.

Due to structural deterioration and the rising cost of maintenance, Alcatraz was closed in 1963. These cookies are a tasty reminder of the oft forgotten families living on Alcatraz. If you’re interested and want to learn more, I suggest reading Al Capone Does My Shirts, a terrific young adult novel by Gennifer Choldenko. Though the story is fictional, Choldenko did a lot of careful research into the lives of the civilian Alcatraz community. It’s a fun and informative read. Snuggle up in a cozy chair, grab a plate of Cinnamon Sugar Cookies and a glass of milk, and get lost in the history! 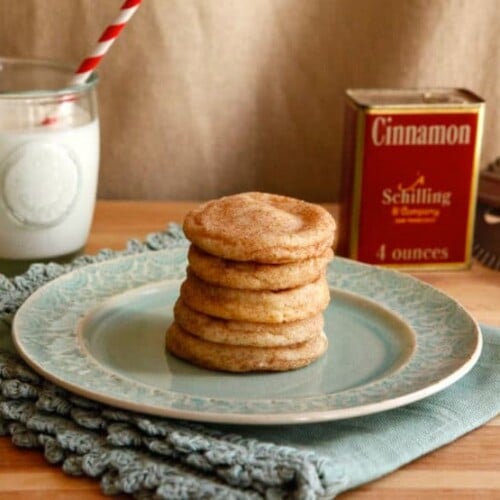 Nutritional information should be considered an estimate only; please consult a registered dietician, nutritionist, or your physician for specific health-related questions. Read more here. Please note that the recipe above is published using a recipe card plugin, with preexisting software which can auto-calculate metric measurements, as well as change the number of servings. Metric conversions and changes to the number of servings (resulting in different ingredient amounts) will only appear in the ingredient list, and are not changed within the step-by-step directions of the recipe.
615 shares
Fig Tree in My Front Yard PREVIOUS