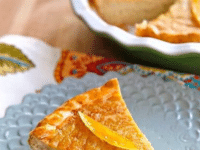 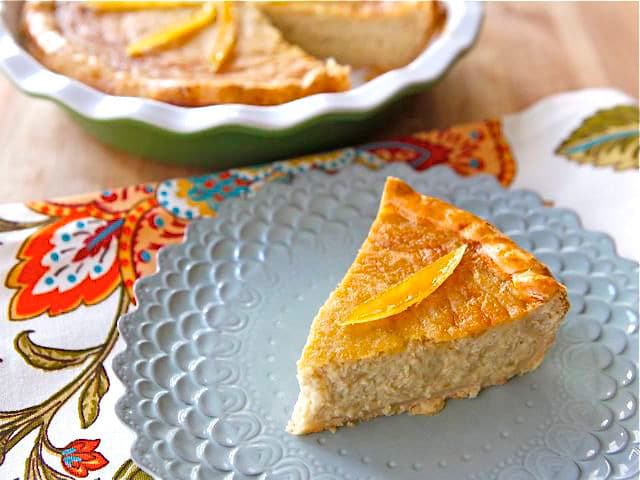 “Now the purpose of this letter is to entreat President Lincoln to put forth his Proclamation, appointing the last Thursday in November (which falls this year on the 26th) as the National Thanksgiving for all those classes of people who are under the National Government particularly, and commending this Union Thanksgiving to each State Executive: thus, by the noble example and action of the President of the United States, the permanency and unity of our Great American Festival of Thanksgiving would be forever secured.”

The first American Thanksgiving has little to do with how we celebrate Thanksgiving today. Just about every detail is different, particularly the holiday foods we enjoy. So where did our Thanksgiving food traditions come from? When did our turkey-centric feast become such an important American tradition? There is very little information available about Thanksgiving meals and celebrations before the 19th century. It’s difficult to get a clear picture of exactly how the holiday has evolved since that first political meeting between the Wampanoag Native American tribe and the Brownist English Dissenters (known today as Pilgrims). Despite this, the more modern version of Thanksgiving does have its own unique history, clearly traceable to an extraordinary American woman. Many of the traditions we enjoy today can be credited to years of campaigning by a novelist and poet named Sarah Josepha Hale. 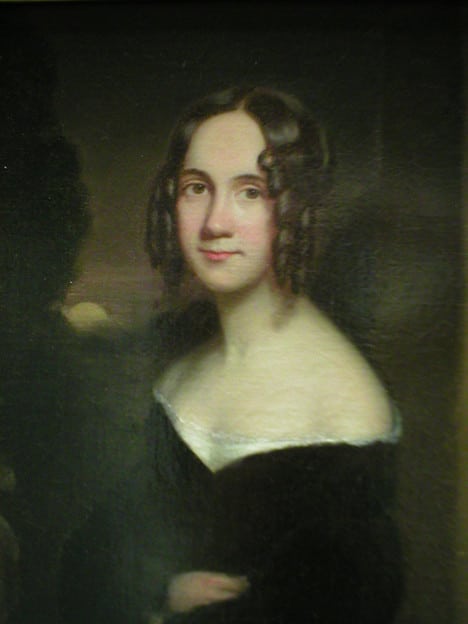 Sarah Josepha Buell Hale, also known as the “Mother of Thanksgiving” (and writer of the nursery rhyme Mary Had a Little Lamb), was born near Newport, New Hampshire on October 24, 1788. Despite growing up at a time when opportunities for women were severely limited, she received a well-rounded education at home through her mother and her brother, a college graduate. In 1806, at just 18 years old, she opened a private school and taught there until she met a lawyer by the name of David Hale. They were married in 1813.

When David died in 1822, Sarah was left with the responsibility of providing for their five children. She found inspiration in her love of reading, and eventually decided to become a writer. After contributing poetry and articles to several popular publications, she wrote her first novel, Northwood: A Tale of New England. Published in 1827, the novel focused on the differences in lifestyle between Americans living in the North and South. Most notably, it included an entire chapter detailing a Thanksgiving meal celebrated by a farming family in New Hampshire. Central to the feast was a roasted turkey, and several of the side dishes we have now come to associate with a traditional Thanksgiving feast. 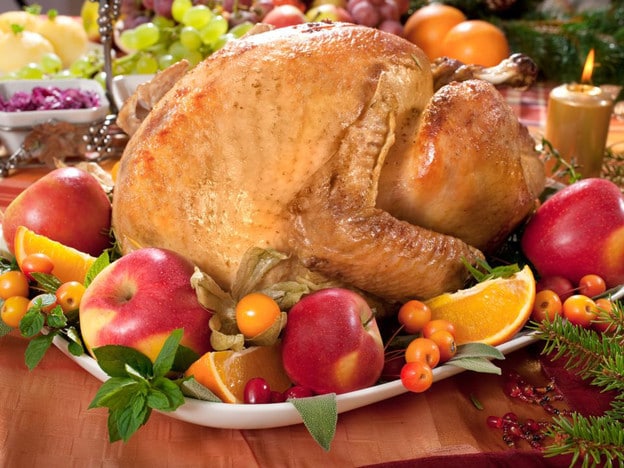 The roasted turkey took precedence on this occasion, being placed at the head of the table; and well did it become its lordly station, sending forth the rich odour of its savory stuffing, and finely covered with the frost of baking. At the foot of the board a surloin of beef, flanked on either side by a leg of pork and joint of mutton, seemed placed as a bastion to defend innumerable bowls of gravy and plates of vegetables disposed in that quarter… Two or three kinds of pies, all excellent, as many of cake, with pickles and preserves, custards and cheese, and cranberry sauce… furnished forth the feast.

Sudden fame from the publication of Northwood earned Sarah a position as editor of Godey’s Lady’s Book in 1837. The publication was the most influential women’s magazine of the time period. With Sarah at the helm, the magazine’s subscribers increased from 10,000 to 150,000 by 1860. The magazine featured poetry, engravings and articles by influential American men and women. With Sarah at the helm, Godey’s Lady’s Book tackled more challenging content like social reform and women’s rights. She even went so far as to publish a piece on how corsets could be harmful to a woman’s health.

In 1846, Sarah began to campaign for a national Thanksgiving holiday. With trouble brewing between the North and South, Sarah believed that a Civil War could be avoided if there was designated holiday in which all Americans could celebrate the blessings of the nation. Her position as editor of Godey’s served as the perfect platform to spread the word of this new holiday that would be celebrated on the last Thursday of November. She featured stories of family gatherings, editorials, and recipes that promoted the New England style of celebrating Thanksgiving. She also wrote numerous letters to the President of the United States and state governors. The holiday was not adopted before the South seceded from the Union in 1861, but this only caused Sarah to increase her efforts, working harder to help bring the nation back together. Just after the Union’s victory in Gettysburg, Sarah finally caught the attention of President Abraham Lincoln, and her efforts were answered. On October 3, 1863, President Lincoln declared that the last Thursday in November would be recognized as a “national day of Thanksgiving,” with an emphasis on the day being celebrated by all Americans, both in the North and the South. Every president since has followed suit.

This is not the end of Sarah Josepha Hale’s impact on Thanksgiving. She also changed the way elementary school children learned about the meeting between the English colonists and the Wampanoag. Prior to Sarah’s great campaign for the holiday, the romanticized story of the first Thanksgiving was unknown. In 1865, when Sarah described the first Thanksgiving as a celebratory feast between the “pilgrims” and the Native Americans, the story spread like wildfire. It was reproduced in numerous other magazines and newspapers. It only took 5 years from the time her article appeared, for the story of Thanksgiving to be taught in schools and included in textbooks. Over the next few decades, the story served as the perfect way to teach newly arriving immigrants about America’s history. Though not historically accurate– the first Thanksgiving was more a political meeting than a social feast– the story has stuck with us over the years.

Not long after taking the position at Godey’s Lady’s Book, Sarah wrote a cookbook and homemaker’s guide known as The Good Housekeeper. I own a modern printing of the cookbook, and I thought it might be fun to make one of Sarah’s seasonal recipes to celebrate her role in our nation’s Thanksgiving holiday. 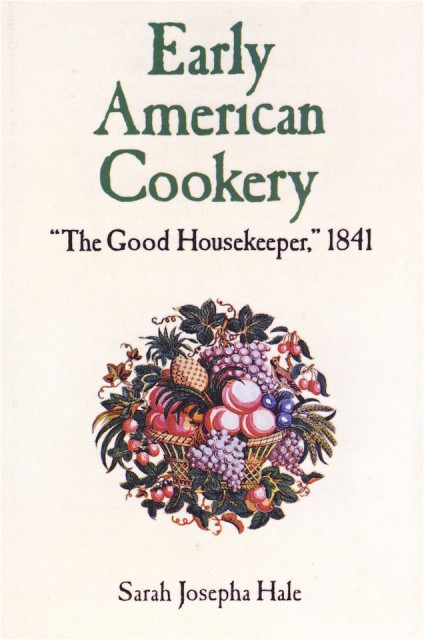 Click here to purchase a copy of Early American Cookery

I’ve stuck with the original recipe as written, with one slight adjustment– I’ve added 1/3 cup of sugar to suit modern tastes. If you’d like to stick with the original amount, use 2/3 cup of brown sugar rather than 1 cup. The pudding will still be sweet, just a little less dessert-like. For the crust, I used my Old Fashioned All-Butter Pie Crust, which is golden, flaky and perfect for this pudding. My updated, slightly sweeter version of this pudding could be subbed as an alternative to pumpkin pie; the texture is similar, and it has a lovely creamy apple flavor. Wouldn’t it be fun to serve a recipe from the “Mother of Thanksgiving” at your holiday feast?

To learn how to make Candied Lemon Peels, click here. 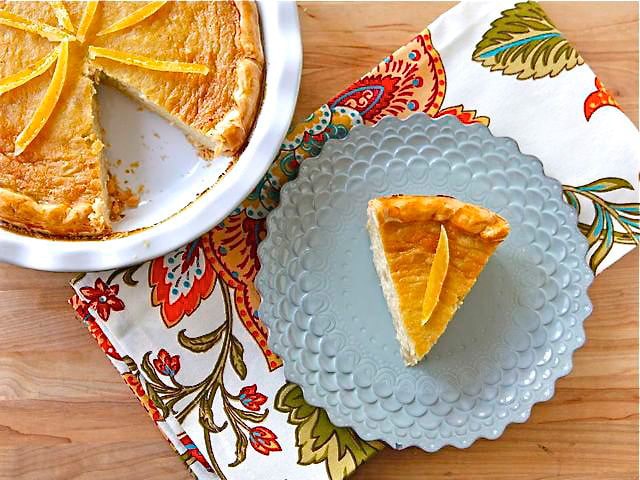 You will also need: 2 ceramic or glass 9-inch pie dishes Serve the pudding as you would a pumpkin pie, sliced, cold or at room temperature. Keep leftovers refrigerated for 3-4 days.

Nutrition Facts
Sarah Josepha Hale's Thanksgiving Apple Pudding
Amount Per Serving
Calories 174 Calories from Fat 108
% Daily Value*
Fat 12g18%
Saturated Fat 6g38%
Cholesterol 73mg24%
Sodium 84mg4%
Potassium 53mg2%
Carbohydrates 13g4%
Sugar 6g7%
Protein 2g4%
Vitamin A 355IU7%
Vitamin C 0.5mg1%
Calcium 28mg3%
Iron 0.6mg3%
* Percent Daily Values are based on a 2000 calorie diet.
Tried this recipe?Let Us Know How It Was In The Comments.
5 from 3 votes
Nutritional information should be considered an estimate only; please consult a registered dietician, nutritionist, or your physician for specific health-related questions. Read more here. Please note that the recipe above is published using a recipe card plugin, with preexisting software which can auto-calculate metric measurements, as well as change the number of servings. Metric conversions and changes to the number of servings (resulting in different ingredient amounts) will only appear in the ingredient list, and are not changed within the step-by-step directions of the recipe.