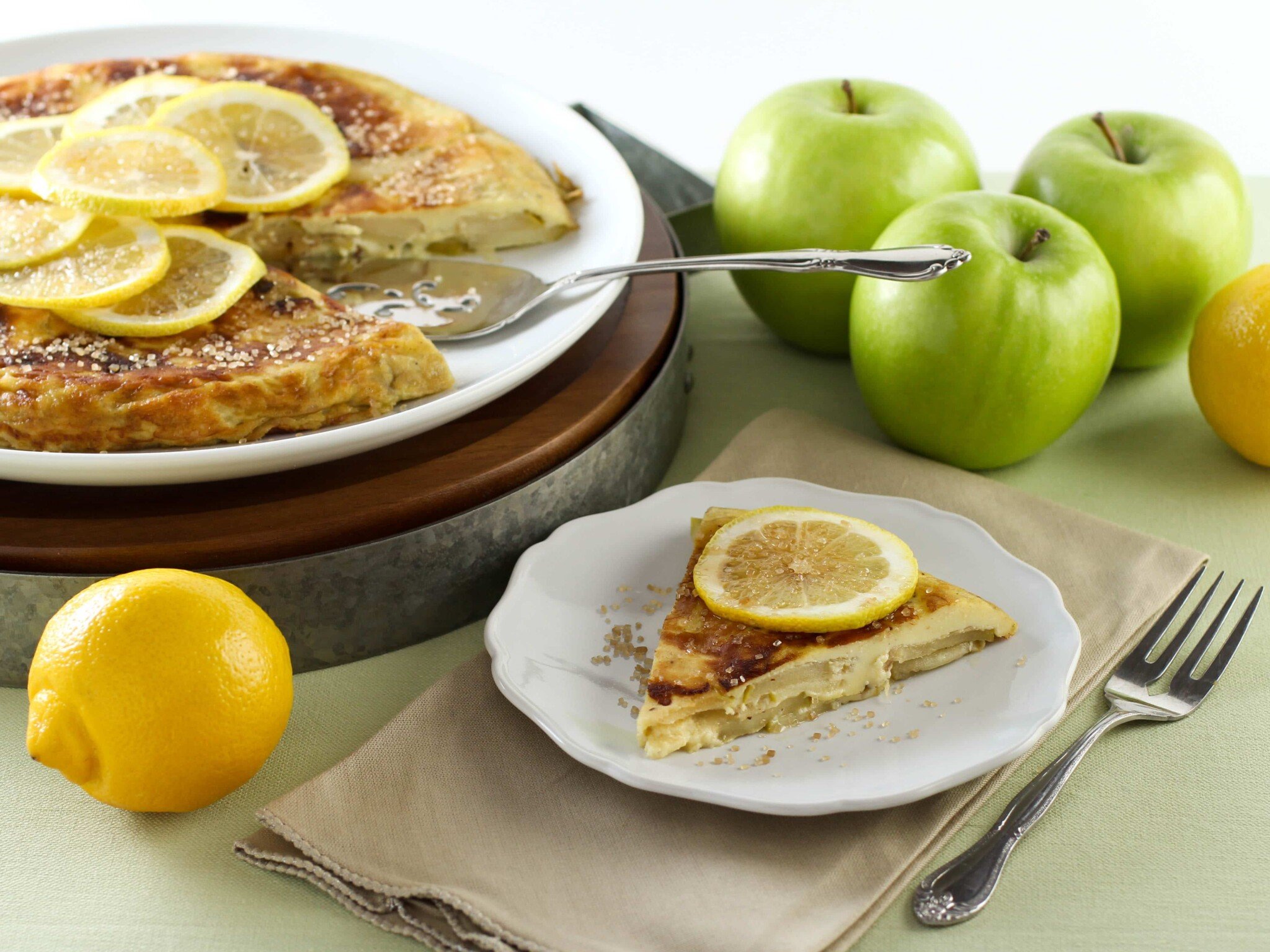 Learn what the Colonial settlers of Virginia ate and a traditional colonial recipe for Apple Tansey.
1.1K shares
4.25 from 4 votes
Jump to Recipe Email Me Recipes 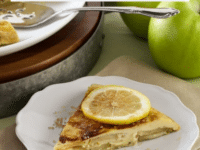 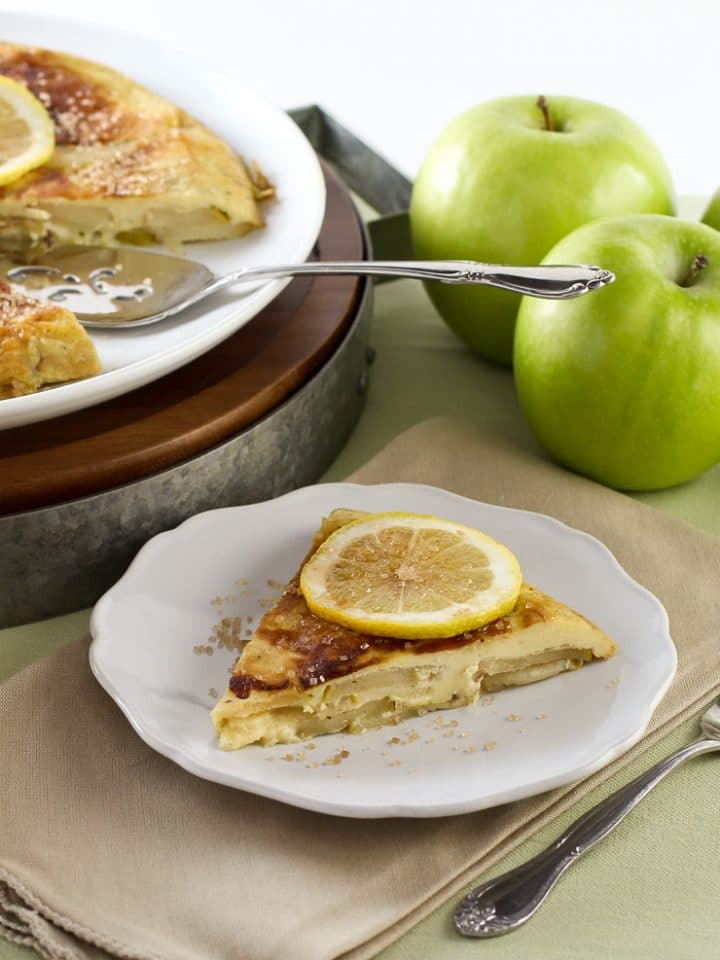 The first colonial settlers came to America for a variety of reasons… money, religious freedom, a new beginning. All undoubtedly had dreams of finding a better life in the New World. It was the birth of our nation, and also the birth of American cuisine.

In 1607 the first British colony—Virginia—was established, and 1776 was the year the Declaration of Independence was signed. This span of years is known as the Colonial Period. It was during this time that large numbers of European settlers began to arrive in the U.S., colonizing along the east coast of North America. There were many different cultural influences in America at the time, including settlers from Europe, slaves from Africa, and Native American tribes. This melding pot of humanity resulted in many diverse approaches to food. To find some perspective in what would otherwise be a massive subject, today I am focusing specifically on the Colony of Virginia, one of the thirteen original British colonies. 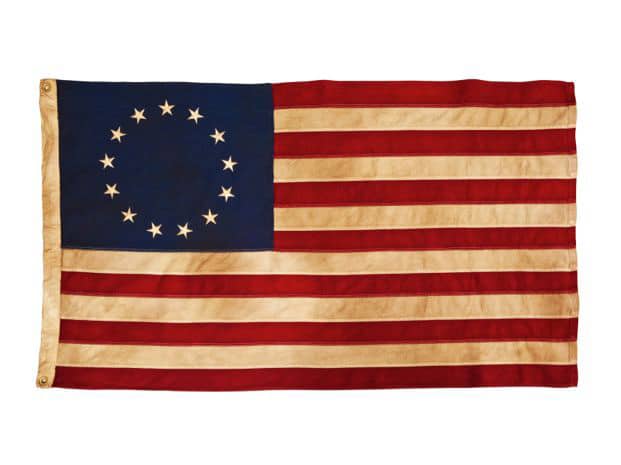 Why Virginia? I’m glad you asked! A few years back I put a lot of work into researching my ancestry. Well, it turns out there are some fascinating characters in my family tree. In my What the Tudors Ate blog, I wrote about my ancestor Sir Thomas Wyatt, a poet in King Henry VIII’s court. Wyatt’s offspring did some pretty interesting things, too. He had a son, known as Thomas Wyatt the younger, who led a rebellion against Queen Mary I (the daughter of Henry VIII and heir to his throne). 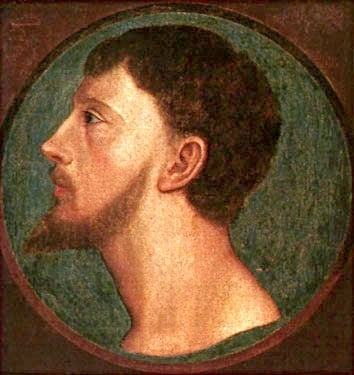 Thomas the younger, it is written, had a “wild disposition” and a deep hatred for Spain. When Queen Mary was betrothed to Philip of Spain, Thomas conspired against the marriage, believing that Mary’s younger sister Elizabeth should be on the throne instead. He led a rebellion of 4,000 men who marched on London, but his rebel army deserted him at the last minute, and he was forced to surrender. He was later tried, found guilty of treason, beheaded and quartered as ordered by Queen Mary, aka “Bloody Mary.”

This might well have been the end of the Wyatt family (which means I would have never been born!), but as luck would have it Thomas the younger and his wife had a son before he was executed. That son, George Wyatt, and his wife gave birth to two sons—Reverend Haute Wyatt (1594-1638) and Sir Francis Wyatt (1588-1644). Those two brothers, Francis and Haute, arrived in America on August 1, 1621 aboard a ship called the George. Shortly thereafter, Sir Francis became the first English crown governor of the Colony of Virginia in 1621. He also introduced the first written constitution for an English colony. This constitution became a model for all later forms of government in the American colonies. 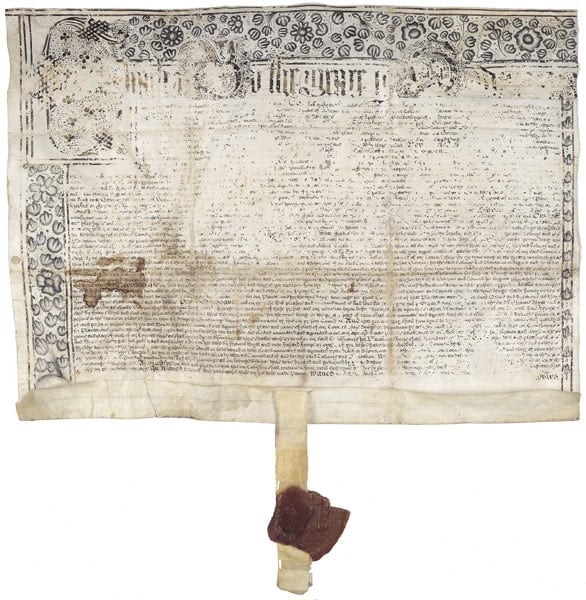 This document was issued by King Charles I on January 11, 1638, and commissioned Sir Francis Wyatt (1588–1644) royal governor of Virginia. Source: Wikimedia Commons

So it seems I am a direct descendent of Francis’ brother, Reverend Haute. I am what some might call an American “mutt,” with many different global regions in my family tree. This Virginia connection is both fascinating and troubling… Virginia’s history of slavery, and the way Native Americans were mistreated when the colonies were founded, leaves me with many questions. I’m still learning about the complexities of my heritage, as I discover more and more about my family roots.

The Colony of Virginia was actually the first permanent English colony in North America, founded at the settlement of Jamestown in 1607. The first decade of colonial life was fraught with hardship as settlers learned to live in this strange New World. European crops would not grow, provisions were poor, and settlers did not know how to fend for themselves in this harsh, uncharted land. 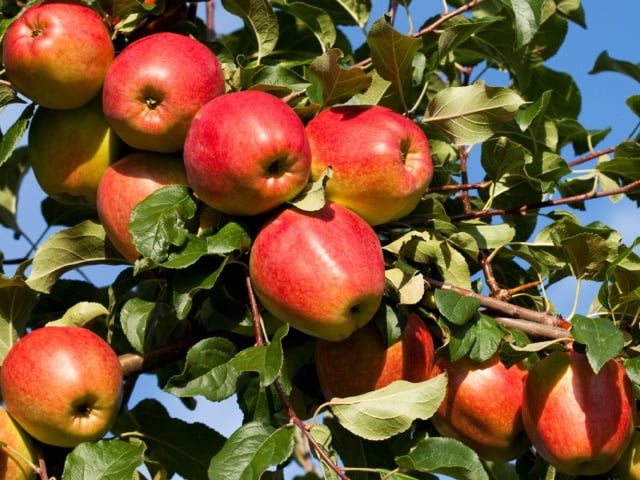 In the early colonial period, settlers relied on fish and wild game (deer, buffalo, wild fowl) to sustain them. Fish from rivers and shellfish from the coast provided an abundant source of protein. As farms were established, cattle were imported and poultry was domesticated. But the most widely consumed meat animal was the pig. Pigs thrived in the South, and were particularly useful to the settlers because their meat was easy to salt and preserve. Lard was often used as a cooking fat. As colonists grew their domesticated animal herds, dairy farming became more popular. Cheese, butter, and eggs became staples of the colonial diet.

Virginia, a plantation colony, has a terrible history of slave trade. African slaves made a major contribution to the Southern colonial diet. Slaves were often permitted to grow their own gardens to supplement their food rations. In these gardens they cultivated a variety of then unfamiliar foods, including yams, okra, peanuts, melons and sesame seeds. These foods were adopted by the mainstream, and quickly became popular throughout the American South.

In the colonies, three meals were served per day—breakfast in the morning, dinner mid-day (the most substantial meal), and a light supper in the evening. Of course, different income brackets enjoyed different types of food depending on what they could afford. The diet of Governor Francis Wyatt would have been quite different from the poorer colonial settlers and slaves. But even the wealthy and well-established had to plan their meals around what was readily available to the colonies. Very few food items were imported, particularly in the early colonial period. 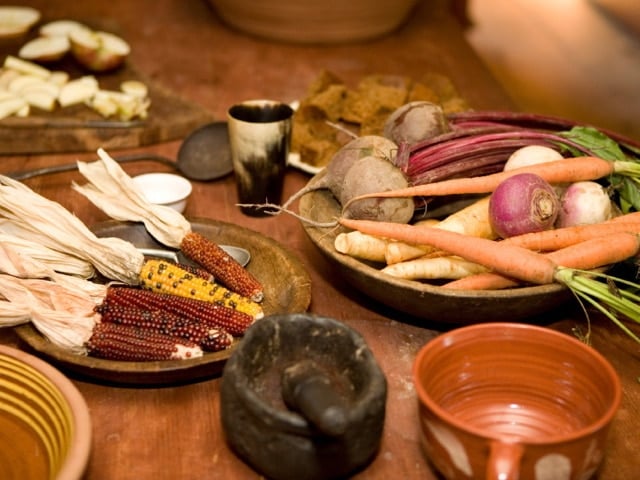 The best descriptions I’ve found about colonial eating appear in a book published in 1975 called A Cooking Legacy by Virginia T. Elverson and Mary Ann McLanahan.

In frontier outposts and on farms, families drank cider or beer and gulped down a bowl of porridge that had been cooking slowly all night over the embers… The southern poor ate cold turkey washed down with ever-present cider. The size of breakfasts grew in direct proportion to growth of wealth… It was among the Southern planters that breakfast became a leisurely and delightful meal, though it was not served until early chores were attended to and orders for the day given… Breads were eaten at all times of the day, but particularly at breakfast.

Early afternoon was the appointed hour for dinner in Colonial America. Throughout the seventeenth century and well into the eighteenth century it was served in the “hall” or “common room.” While dinner among the affluent merchants in the North took place shortly after noon, the Southern planters enjoyed their dinner late as bubbling stews were carried into the fields to feed the slaves and laborers… In the early settlements, poor families ate from trenchers filled from a common stew pot, with a bowl of coarse salt the only table adornment… The stews often included pork, sweet corn and cabbage, or other vegetables and roots which were available…

…supper was a brief meal and, especially in the South, light and late. It generally consisted of leftovers from dinner… In the richer merchant society and in Southern plantation life, eggs and egg dishes were special delicacies and were prepared as side dishes at either dinner or supper.

Speaking of eggs and egg dishes, how about we take a taste of colonial life by preparing an Apple Tansey! This historical recipe appears in The Compleat Housewife: Or, Accomplished Gentelwoman’s Companion, a cookbook written by Eliza Smith, originally published in 1742. Though the book was published in London, it was later reprinted and published in Williamsburgh, Virginia by the printer William Parks. It is the first cookbook ever to be published in the United States. 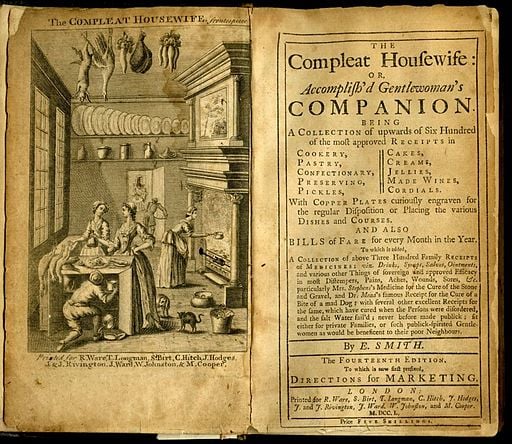 Here is the recipe exactly as it appears in the manuscript:

To make an Apple Tansey,

Take three pippins, slice them round in thin slices, and fry them with butter; then beat four eggs, with six spoonfuls of cream, a little rosewater, nutmeg, and sugar; stir them together, and pour it over the apples; let it fry a little, and turn it with a pye-plate. Garnish with lemon and sugar strew’d over it.

I got super excited when I read this recipe. It was a totally new one to me. Eggs, cream, sugar, and apples. Yum! How can you go wrong??

For our purposes, I have taken the recipe and “translated” it, so you can try a bit of colonial cooking in your kitchen. Pippin apples aren’t available to me locally, so I subbed Granny Smiths, which are tart and firm like Pippins. If you can find Pippins, by all means use them! Rosewater can be purchased at a Middle Eastern market; if you can’t locate a bottle, you can leave it out, as the flavor is quite subtle.

I have to admit, I had a little trouble with this tansey the first couple of times I cooked it. Because of the sugar in the apples and the egg mixture, the bottom of the tansey browns much faster than the top. Adding a lid to the skillet didn’t help much. I finally decided to finish it by broiling the top of the tansey towards the end of cooking. This resulted in a perfectly cooked, perfectly beautiful apple tansey. The colonial settlers didn’t have broilers, obviously, so if you prefer you can flip the egg mixture over like an omelette to cook the opposite side. This will ensure even cooking throughout. Nobody wants a runny apple tansey!

This dish is delicate – light and fluffy. The apples add a subtle sweetness, complimented by the tartness of the fresh lemon juice. It likely would have been served as a side dish at a Colonial dinner or supper. It’s not quite sweet enough to be considered dessert. I think it would make a wonderful addition to a weekend brunch or tea party menu. Sub lowfat milk for cream and your favorite low-cal sweetener for sugar to make a healthier low-carb version. Enjoy! 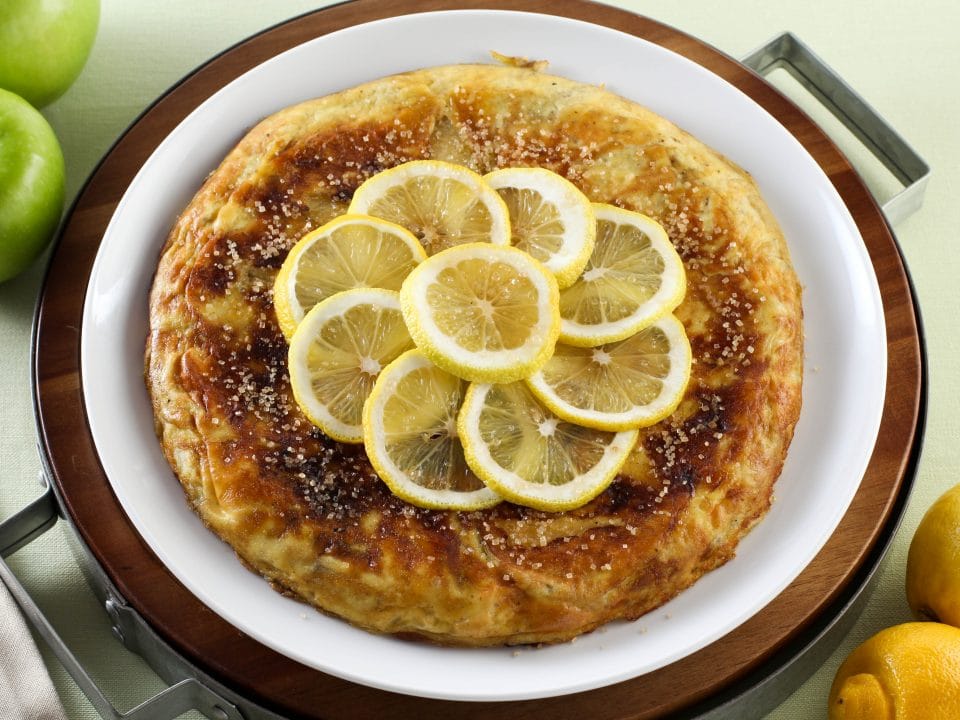 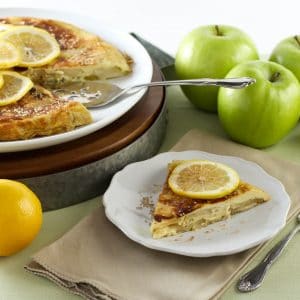 You will also need: a seasoned cast iron or nonstick skillet

Nutritional information should be considered an estimate only; please consult a registered dietician, nutritionist, or your physician for specific health-related questions. Read more here. Please note that the recipe above is published using a recipe card plugin, with preexisting software which can auto-calculate metric measurements, as well as change the number of servings. Metric conversions and changes to the number of servings (resulting in different ingredient amounts) will only appear in the ingredient list, and are not changed within the step-by-step directions of the recipe.
1.1K shares
How to Make a Lemon or Lime Twist PREVIOUS